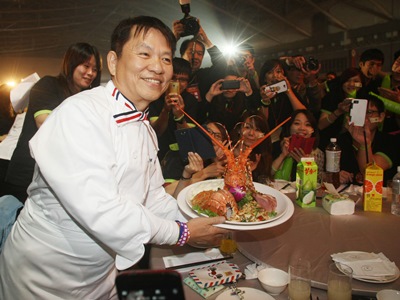 Steve Day, chairman of WowPrime Group, announced that 23 branches in the group would begin offering refunds to customers in connection with the latest edible oil scandal to hit Taiwan’s food industry. Appearing almost two weeks after news broke implicating Ting Hsin and many of the island’s largest food producers, Day appeared in a press conference Tuesday afternoon to describe details of the refund.

Day explained that customers who dined at one of 23 outlets of Wang Steak, Tasty, Tokiya and Ikki goods could apply for a refund beginning October 27 by showing a sales receipt. He added that the refunds would be available about two weeks later, on November 10.

Day acknowledged that the restaurant and food industries have been hit hard by the recent series of food scandals but expressed his hope that things will soon get back to normal and everyone would support businesses in getting past this troublesome period. He added that anyone with questions about the refund offer should go to the WowPrime website for details.

Day emphasized that he has not been hiding from the public for the past two weeks. He explained that as the head of a listed company he cannot make any statements or announcements without being absolutely certain of the facts in the case. He pointed out that he has also written a piece that was included in the latest issue of Business Weekly magazine in Taiwan.

Day noted that the SGS testing group performs rigorous tests on more than 400 kinds of food items each year for the WowPrime Group. The purpose of these tests is to ensure that the company’s customers enjoy food that is both tasty and safe. He apologized to WowPrime customers for the actions of a few unscrupulous operators and said he hopes to continue serving the group’s loyal patrons in the future.