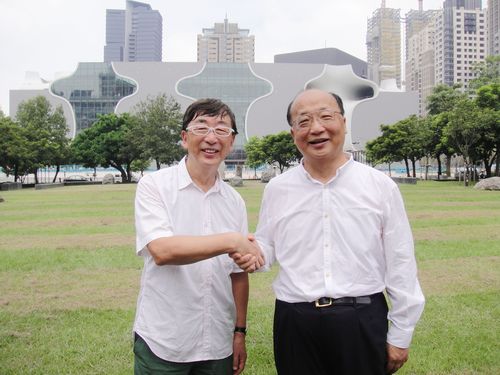 Taipei, Oct. 15 (CNA) A series of performances by prominent groups will take place at the Taichung National Opera House from November to celebrate the inauguration of the new opera house in central Taiwan.
The series will begin Nov. 23 with a production of "Cat Man" by Taiwanese opera troupe Ming Hwa Yuan Arts and Cultural Group, following an inauguration ceremony earlier that day, Susan Yeh, director of the Taichung City Cultural Affairs Bureau, said Wednesday.
Paper Windmill Theatre will then perform its production "Don Quixote" Nov. 27 and Nov. 28, which will be followed by a concert by Taiwanese violinist Hu Nai-yuan and the Taiwan Connection Chamber Orchestra Dec. 7.
Ju Percussion Group will perform Dec. 13, according to the bureau.
An interactive art festival will also be held from Nov. 1 through the end of December at the opera house, featuring 3-D light sculptures, music performances and other events.
The Taichung National Opera House is part of the government's efforts to strengthen support for and improve the quality and international competitiveness of Taiwan's performing arts.
Culture Minister Lung Ying-tai has said that the government hopes to create a "golden triad" for the performing arts in Taiwan. The "golden triad" refers to Taipei's National Theater and Concert Hall, the Taichung National Opera House, and Kaohsiung's Wei-Wu-Ying Center for the Arts, construction of which is set to be completed in 2015. A national performing arts center was established in April this year to
govern the three venues. (By Hau Hsueh-chin and Christie Chen)