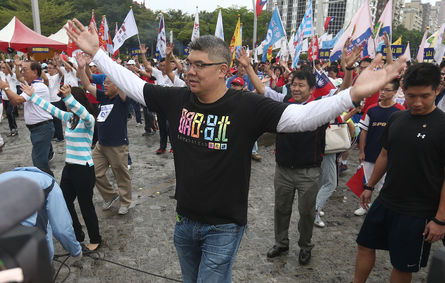 TAIPEI (Taiwan News) – The campaigns of Kuomintang Taipei City mayoral candidate Sean Lien and is opposition rival Ko Wen-je on Tuesday agreed to a live televised debate most likely to be broadcast in late October or early November.
Ko made the proposal for a debate about policies during his visit to the United States last week. The Lien campaign originally said that the KMT national headquarters were handling the scheduling of debates on a nationwide basis.
Lien campaign chief Alex Tsai reportedly signed an agreement with Sanlih E-Television to host the debate, which could be organized either at the end of this month or in early October, depending on the Ko camp’s preference. Later Tuesday, the Ko campaign also showed a letter agreeing to the Sanlih proposal. Elections for mayors, county magistrates, councilors and neighborhood wardens will be held nationwide on November 29.
A spokeswoman for the Lien campaign said that the candidate had hoped right from the start that there would be a fair and public platform where it would be possible to tell voters in the capital about his ideas for their city.
There was a possibility there would be more debates because several TV stations and media companies had field proposals for public discussions, the spokesperson said.
Ko said he was convinced his content would win the debate, though he still needed to work on his presentation style. He reportedly said he had no special preference for a time or place for the verbal confrontation. Three to four debates would be possible, the opposition candidate said, adding the details were being worked out by his campaign manager, former New Party lawmaker Yao Li-ming.
Ko has been leading most opinion polls over the past few months despite allegations of corruption from the KMT. The ruling party accused him of having set up a questionable bank account, known as MG149, at the National Taipei University Hospital, where he spent most of his career as a surgeon.
His call for a debate about policies was partly a bid to bring the election campaign back on track and divert it from the negative campaigning of the past few weeks. Ko has said the account served to fund young researchers and physicians, not to launder questionable money or to pocket illegal donations.
The latest opinion poll, published by Taiwan Indicators Survey Research Tuesday, gave the opposition candidate the highest possible score of 63 percent against 32.7 percent for Lien. Asked for their support, 24.4 percent of respondents said they chose the KMT candidate, 33.8 percent picked Ko, 3.2 percent preferred independent Neil Peng, and fewer than 1 percent each went for four other registered candidates.
TISR said it interviewed 950 voters in Taipei City on September 30 and October 1 for a margin of error of 3.2 percent.
Ko on Tuesday also criticized apparently different comments from the Examination Yuan and from Taipei City Mayor Hau Lung-bin about whether or not his wife was allowed to campaign for him.
Ko’s wife, Peggy Chen, often accompanied him during tours of markets and campaigned on his behalf when he visited the US and Japan during the past month. The Examination Yuan reportedly warned Chen that she could not do so as she works at a government hospital. On the other hand, Hau apparently did not mind, leading Ko to wonder which side he should believe.