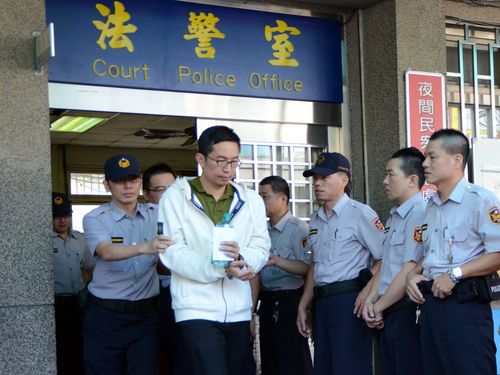 TAIPEI (Taiwan News) – Three senior managers from the Ting Hsin International group were detained Tuesday in connection with the cooking oil scandal, while key businessman Wei Ying-chung was likely to face questioning Wednesday, reports said.
The huge food group, which also has interests in the iconic Taipei 101 building, faces accusations of using animal feed oil in its cooking oil products for human consumption, which has resulted in a massive boycott joined by schools and local governments.
Prosecutors in Changhua County, where Wei and his three brothers who run the group hail from, detained Ting Hsin Oil and Fat Industrial Co. Acting Chairman Chen Mao-chia Tuesday after ten house of questioning. Chen only won promotion from company president last week after Wei stepped down from three company chairmanships in an effort to quell the rising public outrage. Three other managers at the factory in Yungching, Changhua County, were also listed as defendants.
Investigators took away six boxes full of documents and three computer hard drives after raiding the plant, reports said. During questioning, Chen reportedly blamed the animal feed oil scam on his predecessor as company president.
In Kaohsiung County, prosecutors obtained the detention of Cheng I Food Co. President Ho Yu-jen and of deputy chief procurement official Hu Chin-min. Cheng I is the company where the scandal started, the third food safety case to hit Ting Hsin within a year.
The Changhua County District Prosecutors Office said it was likely to question Wei after a scheduled meeting with other prosecutors Wednesday.
There were reports that the Wei family was considering withdrawing from at least two Ting Hsin affiliates, Wei Chuan Foods Corporation and Taiwan Star Telecom Corporation, a newly formed company offering 4G cell phone services.
The family made its fortune in China with the Master Kong instant noodle empire and only returned to Taiwan in 1998 to take over Wei Chuan, a prominent brand in the dairy sector. Cheng I followed in 2005, and Ting Hsin later even managed to buy a 37 percent stake in the owner of Taipei 101.
At the Legislative Yuan, Premier Jiang Yi-huah apologized to the people of Taiwan for the government’s previous failure to handle food safety well. He called for support from business and the public to reform the country’s food sector and give it a new lease on life.
Yet, he emphasized that the government should not just apologize for everything, but also take action and launch measures to try and safeguard the safety of food products.
As a result of the cooking oil crisis, a new poll by Taiwan Indicators Survey Research showed that a record 66 percent of respondents were dissatisfied with Jiang’s performance, with only 15.6 percent approving. The negative figure was slightly higher than the 65.4 percent recorded for Premier Liu Chao-shiuan shortly after Typhoon Morakot in August 2009.
Former Democratic Progressive Party Chairman Su Tseng-chang said Ting Hsin should not only leave Taiwan, it should leave earth. He accused the government of being too lenient for large corporations, allowing them to exploit loopholes and fool the public.