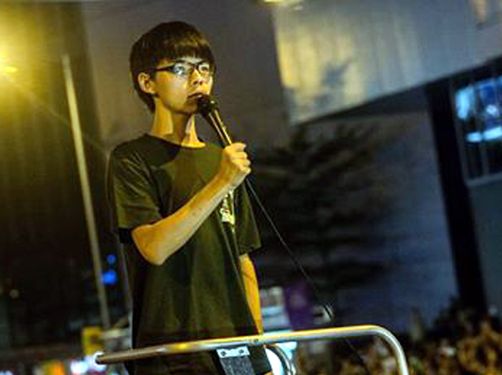 Hong Kong, Oct. 10 (CNA) Student protest leaders in the ongoing "Occupy Central" movement in Hong Kong reiterated Friday that they will not retreat from the streets if Beijing fails to answer their calls for political reform. Joshua Wong, a key student leader of Scholarism, a group that co-launched the movement with other organizations on Sept. 28, said on the group's Facebook page that they would only end the occupation should Beijing reverse its recent decision to pre-select candidates for the election of Hong Kong's chief executive in 2017.
Pro-democracy protesters took to the streets to demand "genuine universal suffrage" to elect the next chief executive, after Beijing requested that potential candidates must first be screened by a 1,200-member election committee and win at least 50-percent support to be nominated.
"Beijing at least should take back its 50-percent nomination threshold," Wong insisted. "Many citizens will not agree if we end the occupation without achieving concrete result."
He added: "We won't accept Beijing's restricted rules for electing our leader; what we want is political reform."
Wong cited Taiwan's Sunflower Movement in March and April as reason why the Hong Kong movement must continue.
"As Taiwan's protest against a trade-in-services agreement with China persisted for one month, don't imagine we could get 'genuine universal suffrage' with just one or two weeks of protest time... Such things don't come cheap," Wong said.
Alex Chou, a representative of the Hong Kong Federation of Students, told a news conference later Friday that demonstrators continued to occupy the streets as the government has failed to provide an explanation on why police fired tear gas on protesters on the night of Sept. 28 and hold accountable those responsible.
The Hong Kong government canceled talks with the students slated for 4:00 p.m. Friday after some of them said Tuesday night that they planned to kick off a new round of "non-cooperation movement."
Instead of backing down, however, more protesters are expected to pour into the major streets still occupied by students in Admiralty, Mong Kok and Causeway Bay Friday night, as the "Occupy Central" movement entered its 13th day.
Hong Kong police said Friday evening that they would not rule out the possibility of a crackdown on demonstrators in these occupied areas, as barricades erected by protesters have caused great inconvenience to residents. (By Stanley Cheung and Flor Wang)