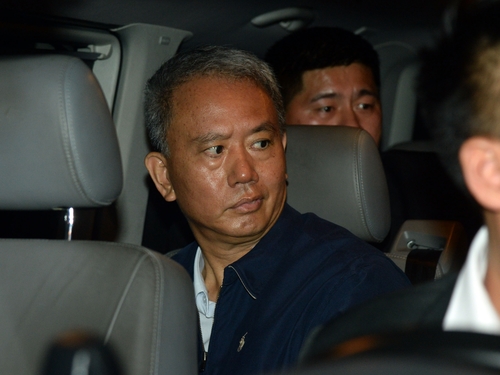 TAIPEI (Taiwan News) – High-profile businessman Wei Ying-chung resigned Thursday as chairman of Ting Hsin Oil and Fat Industrial Co., Wei Chuan Foods Corp. and Cheng I Food Co., three companies caught up in the latest edible oil scandal.
An estimated 230 companies and 37 schools had been affected by edible oil provided by Cheng I which turned out to have included oil for animal feed unfit for human consumption.
Premier Jiang Yi-huah, who only two weeks ago told lawmakers there was no problem with Cheng I oil, said Thursday that fake oil should be met with swift and harsh punishment.
In a news release, the Ting Hsin group said Wei, one of four brothers who run the business empire, had resigned from his three functions. In each case, the company president would replace him for the time being, the statement said.
The Food and Drug Administration said that 68 lard oil products from Cheng I should be preventively removed from sale, while businesses which used the products should report so to the authorities no later than 6 p.m. Friday. If they were not taken off shelves by midnight October 12, the producers would receive stiff fines, the FDA said.
During the previous oil scandal a month ago, over 1,000 food producers, bakeries and restaurants were affected by the use of Chang Guann oil, leading observers to believe that the number of products using Cheng I oil would still rise from the 230 mentioned on Thursday.
Several prominent food brands were again among those hit, including the Wowprime group with its restaurant brands Tasty, Famonn and Tokiya, reports said, though the group issued a statement saying that from September 11, it had been using other oils. The Bread, a bakery chain affiliated with Ting Hsin, was reportedly one of 11 food companies in Taipei City which reported the use of Cheng I oil.
Earlier, hamburger chain Mos Burger said it had used Cheng I oil for a ten-day period last month before changing to another brand. Other producers said they had been using their own lard oil since last month to avoid getting caught up in new food safety scandals.
Members of the Control Yuan, the top government watchdog, said Thursday they would investigate the handling of the food safety cases. The new checks come on top of three Yuan members who applied on September 5 to investigate the oil scandal centered on Chang Guann Co., reports said.