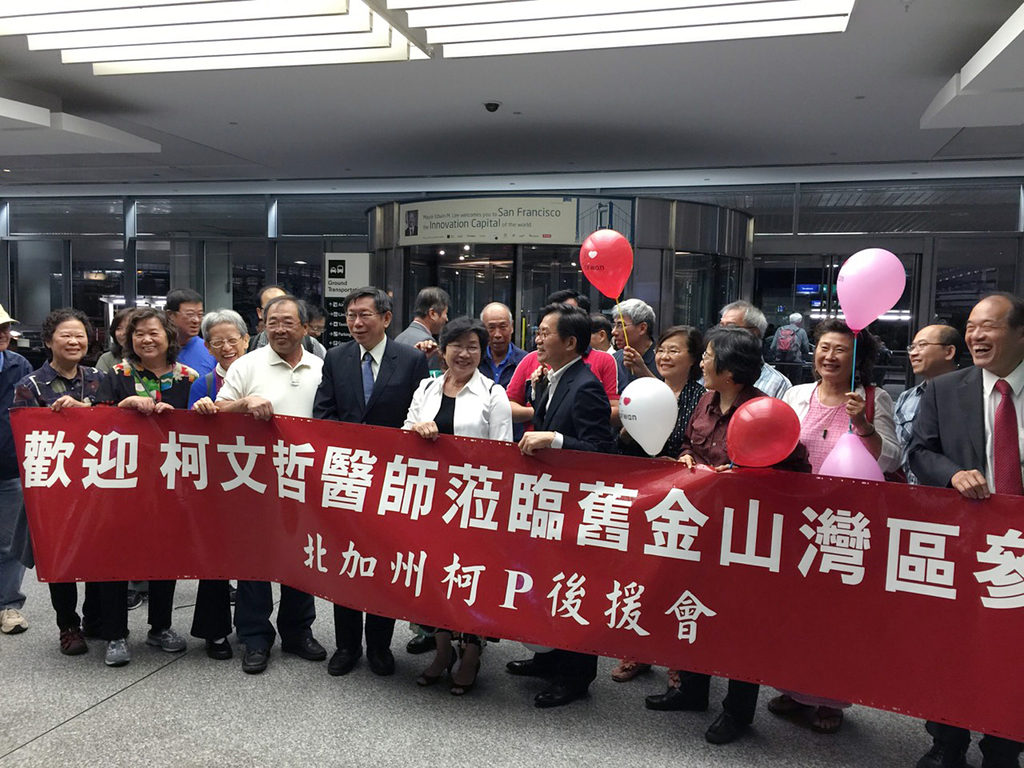 Ko Wen-je arrived to a spirited reception at San Francisco International Airport Wednesday for the start of a five-day trip to the US. A cheering crowd of supporters crowded the Arrivals area in the airport, waving banners of the “Northern California Ko P Fan Club” and visibly buoying Ko as he arrived for the second phase of his “Cosmopolitan Learning Journey.” The trip will include several stops in the Bay area and a quick trip to New York City. Ko will hold talks with businessmen and researchers in both areas and will also present a total of three speeches to overseas compatriots on the two coasts.

Ko noted that he often visits San Francisco as it is one of the favorite spots for conventions and forums for organizations like the American Medical Association. He said he was very pleased to see the turnout at the airport and thanked his well-wishers for their support.

Ko told reporters that his visit is primarily geared toward learning more about urban politics and governance. He will also meet experts in biotechnology to explore areas in which the biotech industries of the Bay area and Taipei can cooperate and augment each other’s work.

Asked his opinion on reports that the National Tax Administration is carrying out a check of accounts used by Ko and his colleagues at National Taiwan University Hospital, he said that he was not worried for himself but was concerned about the inconvenience being suffered by completely innocent individuals. He added that checking into the records of payments from companies or organizations which invited him to lecture is "over the top." The whole thing, he said, amounts to political harassment.

Ko said he could not deny that all the news about the MG149 account and other financial issues could have an impact on the election in November. He expressed confidence in the voters of Taipei and Taiwan, however, saying they are smart enough to distinguish between incidents like the Chung Hsing Bills scandal, the Yu Chang case used against Tsai Ing-wen and the current MG149 controversy. He said that negative electioneering in Taiwan should cease, meaning all biased and distorted activities such as the dissemination of fake news and the use of state machinery to manipulate public opinion.

Told that KMT candidate Sean Lien had criticized him for making a visit to the US at the beginning of October, saying that the timing was chosen deliberately to avoid the ROC National Day holiday and celebrations, Ko said he does not spend too much time worrying about things like that. He explained that "my people scheduled all this a long time ago."