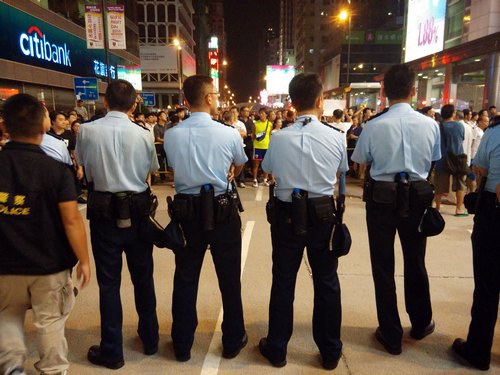 Hong Kong, Oct. 7 (CNA) As the momentum of the "Occupy Central" protest loses steam, a "non-cooperation movement" is being planned by some pro-democracy protesters to hold up their cause, which is aimed at demanding universal suffrage for the people of the Chinese special administrative region to elect their leader in 2017.
Some people in the movement, while reluctant to leave the major occupied areas, announced late Tuesday that they would initiate a "non-cooperation movement" at the Legislative Council to paralyze the body as a means of pressing Beijing to allow "genuine universal suffrage" for Hong Kongers without interference.
The Legislative Council was scheduled Wednesday to resume operations that have been suspended since the occupation movement in downtown streets broke out Sept. 28.
Hong Kong will go through more political turbulence if the "non-cooperation movement" really kicks out at the lawmaking body, analysts said.
Meanwhile, only a small number of demonstrators were still gathered in major streets Tuesday morning in the Admiralty, Mong Kok and Causewaybay districts.
Many of them had left the protest sites after Hong Kong government officials agreed the previous night to conditions raised by the Hong Kong Federation of Students for holding public talks on political reform within this week.
While a little more than 100 protesters were still staging a sit-in at the intersection of Nathan Road and Argyle Street in Mong Kok, only a few remained outside the Chief Executive's Office in Admiralty.
Despite improvements in the situation, Chief Executive Leung Chun-ying said in a TV speech Tuesday that "police would take action at an appropriate time to prevent violence and casualities." (By Stanley Cheung and Flor Wang)