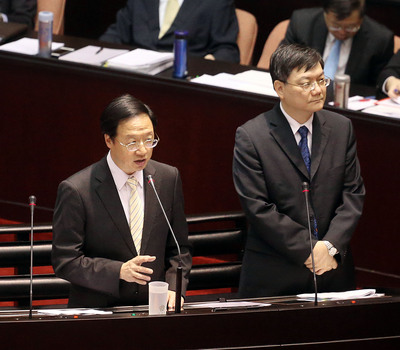 TAIPEI (Taiwan News) – Premier Jiang Yi-huah on Tuesday warned against cyberattacks from China designed to steal secrets.
Cyberwarfare has become a larger priority for the Taiwanese military and security establishment as online attacks and hacking launched from China has become an international concern.
Speaking at the Legislative Yuan Tuesday, Jiang said that web users from China could use any time and place to attack both Taiwan government websites and important private sites in order to obtain confidential information. Their efforts evolved continuously, but the government was also doing its best to block the attacks, the premier said.
Jiang acknowledged a remark from ruling Kuomintang legislator Lin Te-fu accusing Chinese hackers of conducting tests on a daily basis aimed at attacking Taiwanese government websites.
The premier said the Chinese sometimes used private websites to attack. If Taiwanese government employees were too negligent about opening and replying to e-mail messages of uncertain origin, they might unwittingly install a “Trojan Horse” which would allow China to steal confidential information, Jiang said.
Even though on the surface relations between Taiwan and China were peaceful, it was still clear that Beijing had intentions of a political nature, the premier said, adding that it was training for attacks of a varying nature, with drills by its Army, Air Force and Navy as well as by its cyberwarfare specialists. The government has never relaxed its stance that such attacks should be prevented, he told Lin.
The lawmaker wanted to know whether Beijing could succeed in paralyzing Taiwan’s Internet communications, but Jiang assured him that the government had the ability to protect important basic infrastructure against cyberattacks. There were levels of safety measures to protect important sites ranging from one to five, he said.
Each year, government departments held drills to see how long Taiwan could hold out in the face of attempts by Chinese hackers to enter and steal confidential information, the premier said.
He did not say whether Taiwan was planning to set up a “cyberarmy” of its own to strike back, but said there were sufficient experts on hand to train in preventive action directed against enemy nations or terrorist groups.