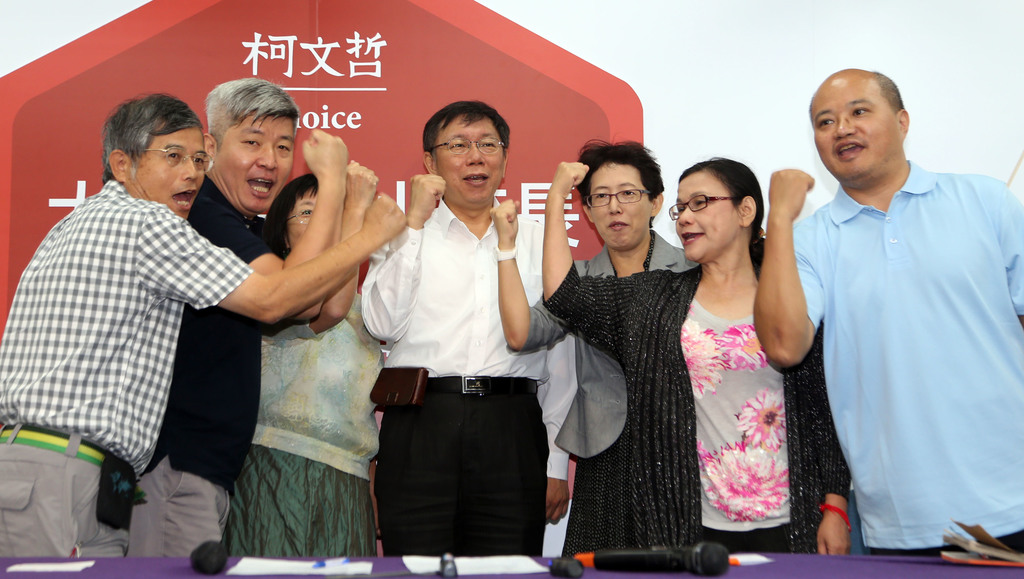 TAIPEI (Taiwan News) – Taipei City independent mayoral candidate Ko Wen-je on Tuesday condemned the ruling Kuomintang for mobilizing the full force of the state, including the tax office, against one man over his hospital account.
KMT lawmaker Lo Shu-lei last month accused Ko of having set up the MG149 account at the National Taiwan University Hospital in order to facilitate illegal practices. The trauma expert has strongly denied the allegations, saying the account served to fund young researchers and physicians.
During a full day of grilling at the Legislative Yuan Monday, hospital president Huang Kuan-tang defended the legality of the account.
In addition, media reports said the National Taxation Bureau of Taipei under the Ministry of Finance wrote a letter asking the Ketagalan Foundation to provide details about speech invitations for Ko between 2011 and 2013, the payments made if any, and information about donations to NTU Hospital. The letter also included a warning that failure to comply with the request for information by October 9 was punishable by a fine of between NT$3,000 (US$98) and NT$30,000, the Chinese-language Apple Daily wrote on its website.
The foundation, which is chaired by Democratic Progressive Party legislator Chen Tan-sun, said Ko had not received compensation for his speeches in Kaohsiung and had paid the high-speed train fare himself. He made fewer than ten speeches for the organization, reports said.
Ko condemned the letter from the tax office as too clear and direct, since it had singled him out. The taxation bureau reportedly said it had received revelations from the public and had therefore sent out the letter requesting information. DPP lawmaker Kuan Bi-ling said she was writing a letter to the MOF demanding an explanation for the case. Other opposition legislators accused their KMT colleagues of being behind the tax office letter.
At a news conference earlier Tuesday, the candidate insisted that not a cent from the MG149 account had entered his own pockets. Ko attacked the KMT for mobilizing such a large force just to investigate one account, as if there was nothing more important happening in the country. Hundreds of similar accounts were operating at several major hospitals around the country, but the government and the judiciary concentrated on just one, he said.
No money had disappeared from the account, and its management had been split over several persons, making fraud much more difficult, he said.
Ko complained that innocent people had been harmed because of the KMT campaign against the account, as other hospital staff which ran the account had been questioned by prosecutors several times. The candidate said the government had been targeting him but it did not dare to confront him, picking on other people instead.
Ko said he was only planning to give full answers to all questions once those questioning him had finished. He said he would choose a time to tell investigators everything in one go. All the accounts and the financial transactions had already been made public, Ko said, again challenging his KMT opponent, Sean Lien, to do the same with his accounts, income and tax payments. Ko also criticized KMT lawmakers for reportedly holding a celebration in Lo’s honor over the allegations against him.
The KMT lawmaker came up with more accusations Tuesday, claiming NT$5.58 million (US$183,000) in business donations to the MG149 account had vanished into private pockets.
Ko acknowledged that it had been unwise for him to use the term “money laundering” in the regulations he wrote for the account, but if he had wanted to commit violations of the law, he said he would not have used that kind of terminology.
The candidate denied accusations from Lo that he was leaving for the United States Tuesday to escape the attention paid to the account. The October 7-12 trip had been planned for one or two months, he said.
Ko will visit San Francisco and New York. Apart from meeting with Taiwanese residents of the US, Ko will also visit biotechnology and venture capital firms. Stanford University in California would also be on his itinerary for talks with students and professors, while in Manhattan, the mayoral contender would study urban planning, reports said.
An opinion poll published by the Chinese-language Liberty Times Tuesday showed only minor changes to support levels for Ko and for Lien in the wake of the allegations.
A total of 41.61 percent of respondents said they would vote for Ko if the election were held the next day, a slight drop from 43.69 percent in a similar poll published last July 1. Lien’s support moved to 24.63 percent from 23.83 percent over the same period.
Asked who they think would win, 35.55 percent named Ko and 30.69 percent chose Lien.
The Liberty Times poll was conducted by phone October 2, 3 and 6, and had a margin of error of 3.01 percent, the paper said.