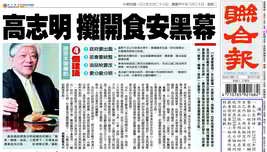 TAIPEI (Taiwan News) – Only more government action rather than stiffer fines was likely to stop food scandals from occurring again, I-Mei Foods Co., Ltd. CEO Luis Ko said in an interview published by the United Daily News Tuesday.
The leading food entrepreneur was speaking in a special interview conducted Monday about how to deal with the aftermath of the latest lard oil scandal. Kaohsiung-based Chang Guann Co., Ltd. was found to have distributed oil produced from recycled kitchen waste or containing imported animal feed oil to more than 1,000 food producers, bakeries and restaurants.
The government needed to play a more active role by assisting food companies with advice on where to buy their oil and how to deal with their waste, Ko said. He also pleaded for changes to the tax system.
The current trend to raise fines and prison sentences for violations of food safety regulations would only drive illegal operators overseas, Ko was quoted as saying by the Chinese-language United Daily News.
The government needed to “educate, guide and assist” restaurants, food stalls and food producers how to improve their quality management and to tell them from whom they should be buying oil and whom they should hand over their waste products to, Ko said.
One of the problems in solving the food safety issue was poor cooperation between government departments, he added. The reform of oil import taxes needed to be done by the Ministry of Finance, tests of the products was the domain of the Ministry of Health and Welfare and the Council of Agriculture, while checks on waste oil needed to be done by the Environmental Protection Administration. Yet, because communication between the ministries was far from optimal, nobody wanted to come out and tell Premier Jiang Yi-huah the true situation, Ko said.
A key element to improve the food safety situation was to change existing taxation levels on food oil, the I-Mei CEO said. The 20-percent tariff on the import of edible oil was leading businesses to import other types of oil instead before refining them into oil which could be used for human consumption, Ko said. Because Taiwan was a relatively small market, various types of oil were also brought in on ships together with other commodities such as soy and corn.
In the wake of the latest oil scandal, the Cabinet announced a range of measures including tougher fines and prison sentences as well as a reform of the system of quality labels. A ban on the import of non-edible oils by food producers was also one of the government’s proposals, but it would be more effective if it introduced a new system where food producers only received a license to produce food and animal feed factories were only awarded a license to make animal feed, Ko said. The separation of the license system would improve matters drastically, the businessman said, comparing the present situation to a family taking its sick relative to see a veterinarian instead of a bona fide physician.
Ko also advised the government to reform the Good Manufacturing Practice quality label system by assisting smaller producers, restaurants and food stalls how to improve their quality management. Once a small company had exported its products and reached a certain size and reputation, it should leave the system and manage itself, leaving resources to help its smaller competitors, the newspaper quoted Ko as saying.
The I-Mei CEO also lashed out at the current system of handling waste oil. Out of 90,000 tons of oil produced, only more than 20,000 tons was registered by the government, meaning the rest was sold to “Kuo Lieh-chengs,” Ko said, referring to the main suspect in the recent lard oil scandal. Kuo ran an illegal factory in Pingtung County where he recycled waste oil and sold it as fit for human consumption.
After criticism some years ago, fastfood restaurants used fresh oil at a speedier rate, but nobody knew where all the old oil ended up, Ko said.