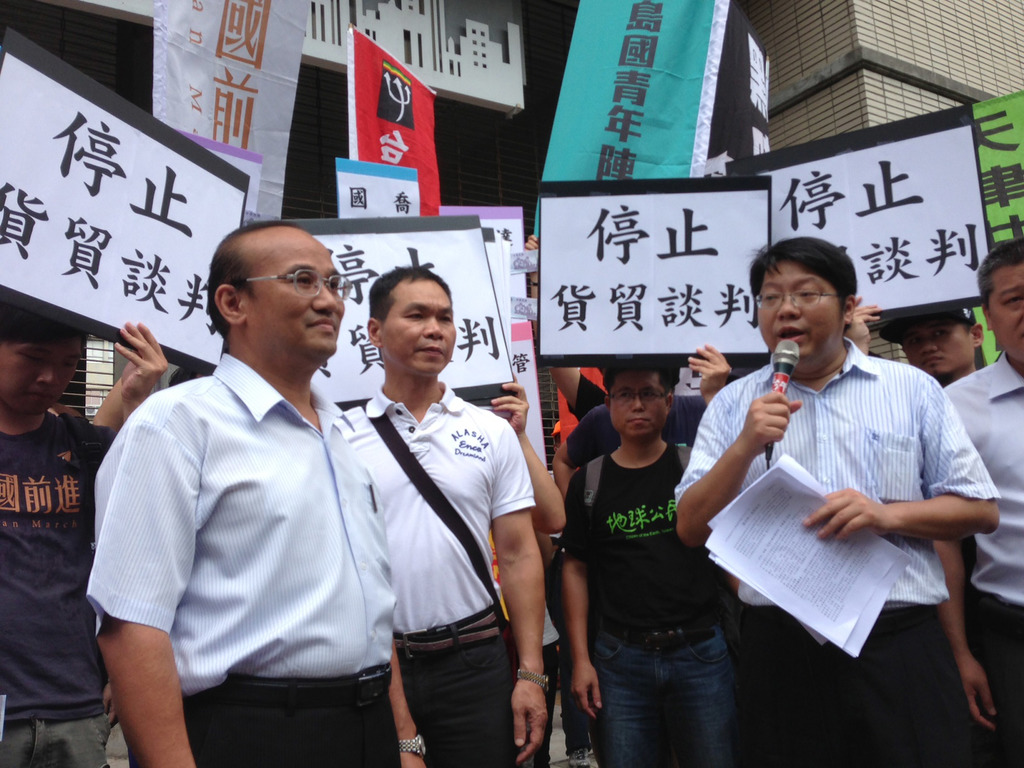 TAIPEI (Taiwan News) – Protesters called for a stop to the talks on a merchandise trade pact with China which resumed in Taiwan Wednesday.
The talks followed the June 2013 signing of a trade-in-services pact, which has still not been approved by the Legislative Yuan following massive protests during the spring. Formal negotiations about the merchandise accord started last October but a round scheduled for April was postponed.
Representatives of dozens of civil groups and social organizations appeared outside the Ministry of Economic Affairs during the morning to call for an immediate halt to the Taiwan-China talks, which were being held at an undisclosed location in Northern Taiwan due to fears over larger protests, reports said.
A new pact would benefit only major corporations and financial groups but harm farmers and laborers, the protesters said.
Government officials said it was significant that the talks could move ahead after the Sunflower protest movement of the spring. Students and other opponents of the service trade pact occupied the Legislative Yuan from March 18 to April 10, succeeding in blocking passage of the deal until now.
The government of President Ma Ying-jeou wanted the Legislature to approve the pact during a special session during the summer, but the move also failed, leaving the accord still on paper. When lawmakers open their new session this Friday, the trade agreement might move onto the agenda again, though opposition parties and activists are still opposed.
The critics say the services and the merchandise accords will damage the traditional sectors of Taiwan’s economy, causing massive unemployment and an ever greater reliance on China.
Subjects for the merchandise talks were cars and components, machine tools, petrochemical products and flat panels, said Economics Minister Duh Tyzz-jiun. The talks, which are scheduled to last for three days, will be led by Yang Jen-ni, director general of Taiwan’s Bureau of Foreign Trade, and Chen Xing, the head of the Department of Taiwan, Hong Kong and Macau Affairs at China’s Ministry of Commerce.
Taiwan wants lower tariffs for its products entering China. Reduced import duties on products of Taiwan’s automotive industry in China would boost the development of Taiwanese manufacturers of automobile components, Duh told reporters.
The negotiators also wanted to prevent the Taiwanese agricultural sector from being put on the agenda for liberalization, according to media reports. Duh said technical issues would come first and the merchandise pact talks would be kept completely separate from the embattled trade-in-services accord. The minister identified “five baskets” at the talks, namely items ready for immediate tariff cuts, lower tariffs in five, ten or 15 years, and other items or exceptions.
The opposition Taiwan Solidarity Union warned Wednesday that 2,200 agricultural and industrial products from China could soon be imported into Taiwan without or with lower tariffs.
The low wages, cheap land and limited demands for environmental protection meant that the Chinese products would pose a strong threat to Taiwanese competitors, the opposition party argued.
The TSU accused the president of betraying his promises to protect Taiwanese farmers’ interests.