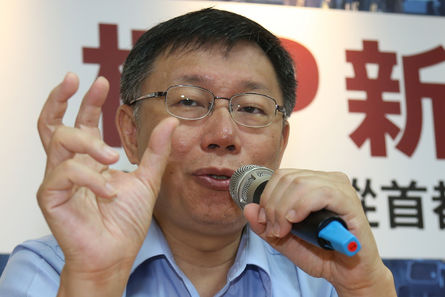 Taipei First Funeral Home, which is located on prime property near Songshan Airport in the city, tops the list of current topics after KMT mayoral candidate Sean Lien broached the idea of relocating the funeral home to the Shanchuku areas in the mountains to the southeast. Noting that the proposal aroused protests from city councilors in the nearby districts of Nangang and Neihu, independent candidate Ko Wen-je mused that "Lien needs to convince them before he tries to convince us."

Sean Lien raised the idea of relocating the funeral home in order to accommodate one of the key points in his campaign, that of building a total of 20,000 units of public housing in the city. The project that would be the counterpart of the prestigious Emperor apartment complex for elite residents in Taipei, only reserved for rental to younger and less affluent citizens of the city who cannot afford to buy a home.

Ko was accompanied by DPP Taipei City Councilors Ho Chih-wei, Lin Shih-tsung and Wu Su-yao, TSU Taipei City Councilor Chen Chien-ming and DPP Taipei City Councilor candidates Wang Wei-chung, Chen Cih-hui and Hsieh Wei-chou in a vote-canvassing tour of the neighborhood of markets in the Shilin and Shezi areas Sunday morning. Asked about Lien’s suggestion, Ko conceded that the idea of moving the funeral home might have merit, but it would be necessary to find an appropriate place to move the establishment before taking any precipitate action.

Another problem raised by Lien’s proposal would be whether anyone would be willing to live in housing constructed in an area that was previously occupied by a funeral home. Real estate sales agents have a difficult time selling properties where a resident committed suicide or was murder, and the onus can easily be transferred to something like the site of a funeral home. In addition, there could be drawbacks in the Shanchuku area itself, which is accessible only by one major road and would cause huge traffic tie-ups when larger funerals take place.

Ko noted that any new site would have to be separated from residential areas as well as respectful to the spirits and memories of the departed. The most important thing in considering a move, said Ko, is to communicate with local residents. In addition, he suggested that Sean Lien talk the idea over with members of his own party before floating any balloons on the subject. Otherwise, he said, it would be very difficult to convince the public of the wisdom of relocating the funeral home.

Ko added that as far as large-scale development projects in the city during the next 20 years are concerned, the best candidate for a likely spot should be the land now occupied by Songshan Airport. Relocating or closing the airport would free up some 600 hectares of land including 400 hectares of the airport and another 200 hectares in the surrounding area. This could provide ample space for both the First and Second Funeral Parlors as well and for many other useful developments as well, said Ko..