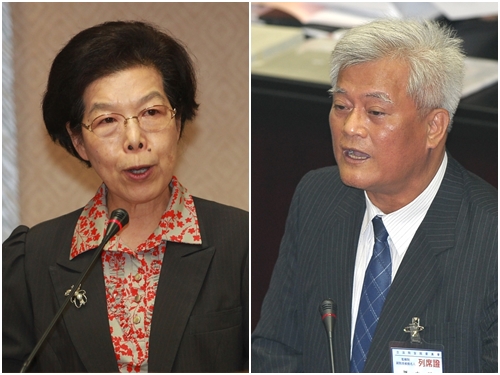 TAIPEI (Taiwan News) – By the narrowest possible margin, the Legislative Yuan on Tuesday approved the nomination of Central Election Commission Minister Chang Po-ya as new president of the Control Yuan for a six-year term, but it also sank an unprecedented 11 nominees.
The sudden defeat means that when the new Control Yuan is sworn in August 1, it will only count 18 instead of the usual 29 members, but President Ma Ying-jeou will be allowed to name new candidates to replace those who failed the test Tuesday, reports said.
The first reaction from the Presidential Office was that it respected the outcome of the vote, but there was no immediate comment on whether Ma would nominate replacements and when.
Chang was approved with the barest minimum of 57 votes necessary, or one vote more than half the 112 legislators. A total of 36 voted against her and 14 ballots were ruled invalid.
Chang, 71, has a long career in politics, becoming famous as independent mayor of Chiayi City before joining the Cabinet as health minister and later interior minister. She will be the first woman at the head of the Control Yuan.
Ma nominated former Indigenous Affairs Minister Sun Ta-chuan, a member of the Puyuma people, as her running mate. His appointment also won the approval of lawmakers Tuesday by a margin of 60 to 33, with 14 ballots not valid.
One of the 11 members who didn’t make the cut Tuesday was Hsu Kuo-wen, a prominent Yilan County physician who announced earlier this month he was withdrawing from the nomination process. His close links to the KMT had provoked criticism that he had received the nomination for services rendered to the party.
The list of rejected nominees also included several incumbents such as consumer rights advocate Cheng Jen-hung, former New Party politician Li Bing-nan, former Legislature official Yu Teng-fang and Taiwan Women’s Rescue Foundation founder Shen Mei-chen.
Newcomers who failed to make the grade included former health official Kang Chao-chou, former Taipei City and central government member Fan Liang-shiow and attorney Hsu Wun-pin, who was accused during the nomination process of being too pro-China.
Tuesday’s vote only went ahead after Legislative Speaker Wang Jin-pyng accepted an opposition request to change the layout of the voting booths to make it impossible for KMT lawmakers to show off their ballots. The ruling party members had been under strong pressure from the leadership to stick to orders from above and vote in favor of Ma’s nominees, despite the confidentiality of the vote. As a result of the concession, KMT caucus officials expressed fears that two or three of the nominees might not win confirmation.
An attempt to pass the full list for the top government watchdog body failed during the Legislature’s previous extra summer session because of strong resistance from the opposition Democratic Progressive Party.
President Ma Ying-jeou nominated the candidates, but several of them faced sharp questions from opposition lawmakers about their backgrounds. The DPP legislators first prevented a vote on the nominees from taking place, leading to the ruling Kuomintang proposing a second special legislative session during the summer recess. According to the Constitution, the new Control Yuan should be sworn in on August 1.
The vote was preceded over the past few days by a stream of derogatory comments about the Control Yuan by the outgoing holder of its presidential position, Wang Chien-shien. He described the body as a “ship of thieves” which should be abolished and added he would have been happy had he never been nominated by Ma six years ago.
The ending of the Control Yuan and the transfer of most of its duties to the Legislature has been a DPP demand for many years, but Wang hails from the opposite side of the political spectrum, from the fiercely pro-unification and anti-DPP New Party.
During Wang’s tenure, the Control Yuan came under repeated attack for failing to tackle major corruption cases and for its reluctance to impeach senior officials, including elected politicians.
The DPP described Ma’s nominations for the new Control Yuan as “the worst list of candidates” ever, accusing him of rewarding political service rather than looking for truly independent investigators. The Control Yuan has the power to censure and impeach top government officials.
People First Party lawmaker Chen Yi-jie said the body’s image problems would lead it to lose public trust and might even cause a constitutional crisis.