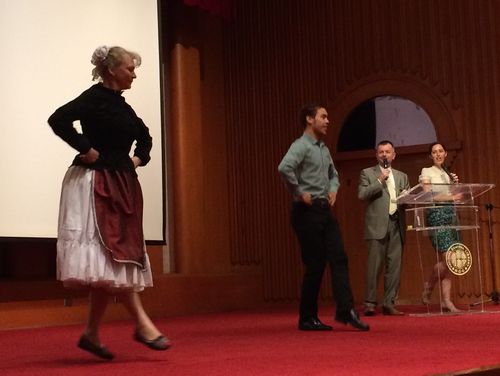 Taipei, July 28 (CNA) The Hungarian Trade Office in Taiwan donated a collection of CDs featuring the Central European country's folk music to Taiwan to promote cultural exchanges between the two countries. The collection was donated to the National Central Library in Taipei at a ceremony Monday, and Hungary's representative to Taiwan Levente Szekely said he hoped the CDs would enable Taiwanese people to know more about Hungary and Hungarian culture. During the ceremony, Szekely, a violinist-turned-diplomat, gave a presentation and showed videos to introduce the development of his country's folk music and dance, and his wife demonstrated some Hungarian folk dances. The collection of Hungarian folk music has been given to European and United States institutions, Szekely said, but the donation to the Taiwanese library was the first in Asia. Tseng Shu-hsien, director-general of the library, expressed her gratitude for the set of 50 CDs and books on Hungarian traditional music and dance, lauding the collection as an opportunity for Taiwanese to learn more about Hungary's rich culture. In addition to Hungary, the library has also worked with other foreign offices in Taiwan, including those from Italy, India, Turkey, to promote bilateral cultural exchanges, Tseng said. (By Elaine Hou)