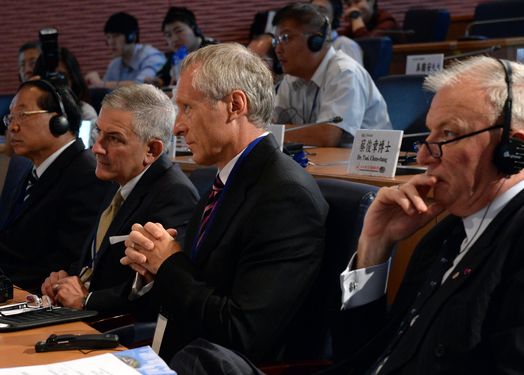 Taipei, July 28 (CNA) The United States is hoping to expand cooperation with Taiwan on security issues, according to an American Institute in Taiwan (AIT) official speaking Monday at an international conference in Taipei. The U.S. values cooperation with Taiwanese law enforcement agencies, said William Klein, acting director of the U.S. representative office, adding that Washington is now seeking ways to expand the partnership in that regard. He made the remarks at the opening of a two-day International Conference on Homeland Security organized by Taiwan's Office of Homeland Security. Klein also took the opportunity to laud the bilateral relationship between Taiwan and the U.S. This year marked the 35 anniversary of the Taiwan Relations Act, he noted, saying that unofficial bilateral relationship has never been stronger than it is today, he said. The TRA, enacted by the U.S. Congress in 1979, has served as the cornerstone of the relationship between Taiwan and the U.S. The two have since cooperated closely in commerce, economics, culture, security, environment, science, technology, health and other areas, Klein said. Meanwhile, travel for business and tourism from Taiwan to the U.S. has increased 35 percent since Taiwan entered the U.S. Visa Waiver Program (VWP) in November 2012, he pointed out. Taiwan's entry into the VWP also underscores the confidence the U.S. places in Taiwan's rule of law and its social, political, and economic institutions, he said The homeland security conference in Taipei has brought Taiwanese officials and experts together with counterparts from Canada, Belgium, South Korea, Israel and the U.S. to discuss topics related to maintaining public security during the 2017 Universiade in Taipei, according to the organizers. Officials from local governments in Taiwan are also attending the conference to learn more about information security, emergency medical assistance, counter-terrorism measures and disaster prevention, the organizers said. (By Tang Pei-chun and Elaine Hou)