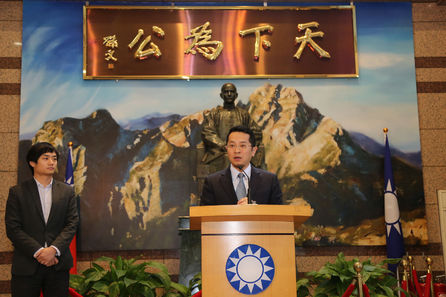 Legislative Yuan Speaker Wang Jin-pyng has called a meeting of all committee members of the Legislative Yuan tomorrow in advance of the opening of the Second Special Session of the legislative body. The meeting will address the agenda for the special session and tackle the task of ensuring that discussion and voting go as smoothly as possible. At the same time, the caucuses of the KMT and DPP will also meet to discuss their respective strategies during the special session. The KMT is set to propose 18 different bills while the DPP is offering five, including two that are being co-presented with the Taiwan Solidarity Union,

The KMT legislative caucus met last Thursday to formally request a second special legislative session to begin July 28 and run for two weeks. The caucus suggested that the first item on the agenda for the special session should be discussion and approval of the list of nominees for the Fifth Control Yuan. Once that matter has been settled, other matters to be considered would be the Free Economic Pilot Zone (FEPZ) bill, proposals submitted by the Executive Yuan and the opposition party for oversight of negotiations of cross-strait agreements, and a fairly long list of other bills.

Lin Hung-chih, the Director of the KMT Policy Committee, said last week that if the ruling and opposition parties compete against each other in the various committees of the Legislative Yuan, "bills will never get voted on." He noted that the KMT is willing to act in good faith if the DPP is open to rational discussion, adding that the KMT does not have any particular priorities regarding the bills it has proposed.

Lin pointed out that the DPP’s push for changes in the Election and Recall Law to allow non-party candidates in an election to send monitors to check the counting of ballots is not practical. He said if any candidate can provide a monitor it can easily lead to crowding and possibly interference in the ballot counting. He said the costs involved in such a change are also unacceptable

Lin said that while keeping in mind these and other problems, the KMT is open to suggestions for ways to allow Ko Wen-je to be able to provide someone to monitor balloting in the Taipei mayoral race. He urged Ko to look for a solution, possibly in the form of a formal endorsement from the DPP, in order to meet the qualifications for sending someone to check on the vote counting.

The DPP has scheduled a meeting of its full caucus Monday morning to discuss final preparation s for the special session. Caucus Secretary General Tsai Chi-chang notes that the caucus agrees that it should adopt a positive attitude toward the handling of the approval process of the Control Yuan nominees. As for revisions in the election law, the caucus is hopeful that it will be able to move quickly through the second and third readings of proposed legislation.

Fan Chiang Tai-chi, the head of the KMT Culture and Communications Committee, appealed to the DPP on Sunday not to boycott the proceedings of the special session. Fan Chiang said such obstructive behavior by the opposition only serves to undermine the nation’s constitutional system while adding nothing to the effectiveness of the Legislative Yuan’s actions.

Despite the rancor between Blue and Green at the end of the previous special session, a press release distributed by Fan Chiang expressed hope that DPP Chairman Tsai Ing-wen and the DPP leadership will work to enable a "professional review" of the nominees in accordance with the laws of the Constitution and will refrain from using “all kinds of ridiculous excuses" including boycotts and other harmful delaying tactics that only show that the DPP has no respect for the Constitution.

Fan Chiang added that since June the world has seen the DPP offering any number of tactics to bully other legislators. He noted that the opposition has used its old tricks of occupying the podium and blocking the ballot box, not allowing other legislators to exercise their right to vote. He termed such practices "the worst kind of destructive behavior” and a strategy that can only lead to political chaos. Fan Chiang pointed out that in the past, 89 DPP legislators signed a petition criticizing actions like minority filibusters, only to turn around and be the first to violate the Council of Grand Justices’ Interpretation No. 632 on such actions

Fan Chiang also charged that the DPP’s claim that Ma Ying-jeou’s list of nominees for the Control Yuan was "the worst list of nominees in history" does not bear up. He claimed that a list of nominees for DPP legislator-at-large offered by Tsai Ing-wen several years ago included people like Ker Chien-ming, Cheng Su-hua, Tsai Huang-lang and Chen Ching-chun, all of whom have faced prosecution and sentencing for illegal acts. Fan Chiang noted that the list inspired great controversy throughout the political arena , and the DPP’s call for "stricter and wider self-discipline" now to criticize the KMT’s list of Control Yuan candidates is a gross use of double standards. He said the DPP has no right to be picky about names on the list and make irresponsible remarks about the candidates.

Fan Chiang cited the case of Kung Chao-sheng, a former chairman of the Finance and Securities Commission (FSC). Kung was implicated in three cases involving Taiwan Sugar in May 2006 and should have offered his resignation but instead refused to step down. As a result the Executive Yuan issued an order for his immediate suspension.

Fan Chiang reminded everyone that Tsai Ing-wen was the vice premier in July 2006 when then-Premier Su Tseng-chang approved the resignation of former Minister of the Interior Minister Yen Wan-chin over mishandling of the abortive Beitou Gondola BOT project. Fan Chiang said cases like these show that the DPP has been all too ready to apply double standards in criticizing members of the government.