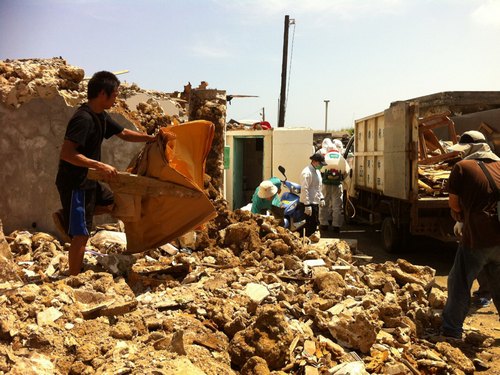 TAIPEI (Taiwan News) – The deadly July 23 crash in Penghu might affect future applications by TransAsia Airways for new routes, the Civil Aeronautics Administration said Saturday.
A TransAsia ATR-72 with 58 passengers and crew on board crashed during the aftermath of Typhoon Matmo Wednesday evening, leaving 48 people dead, including the pilots, and 15 people injured, including five residents of the homes hit by the plane.
By Saturday, ten bodies had still not been identified, but the results of DNA testing would allow the process to be completed later in the day, said Lee Wan-lee, a CAA deputy director-general. Four bodies were transported to Taipei for a short ceremony at Songshan Airport. The identities were not released, but media reported they were the co-pilot, a crew member and two French medical exchange students.
Lee said that any conclusions from the investigation into the crash might have repercussions for the airline. Its right to ply the Penghu route would not be taken away and other domestic routes that had already been handed out would remain in TransAsia’s hands, Lee said, but in the worst-case scenario, it might be barred from applying for new international routes for one year.
The flight recorders were recovered and moved to Taipei, where their analysis was expected to be completed next week. There were conflicting allegations about why the plane crashed, though the typhoon was widely believed to have played a major part. The pilot reportedly asked for permission to try a second attempt at landing after a flight from Kaohsiung, but it then disappeared off the radar.
Media reports said Friday that it might have hit treetops before trying to fly higher but crashing down on homes in the township of Huhsi.
The CAA rejected accusations that the airport was ill-equipped, or that the plane should not have been allowed to fly during the storm. Officials pointed out that other flights had successfully landed in Penghu just before the TransAsia Airways plane.
Lee confirmed reports Saturday that another TransAsia ATR-72, flying from Kinmen to Songshan, had been hit by lightning the day after the Penghu crash. Because of the anti-lightning equipment, passengers had not been at risk, but some elements had been damaged and had been sent to the manufacturer, Pratt and Whitney, in Canada for repair, Lee said.