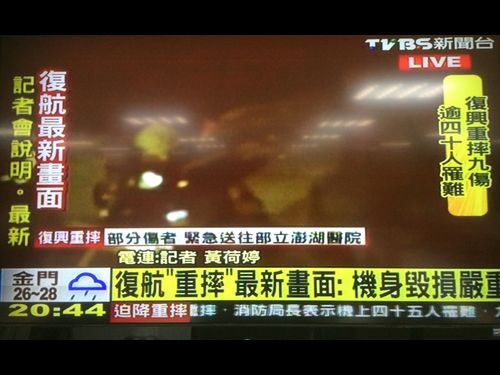 TAIPEI (Taiwan News) – As many as 47 passengers of a TransAsia Airways flight might have died as it made an emergency landing in Penghu Wednesday evening, Transportation Minister Yeh Kuang-shih said.
Over the course of the evening, the number of casualties repeatedly changed, varying also from source to source. The Penghu Fire Department chief was quoted as saying 51 people died, but later news station TVBS said only one passenger had been confirmed as dead, with eleven saved and the fate of 46 still unclear. Later in the evening, Yeh mentioned 47 dead and 11 survivors.
Flight GE 222 was carrying 54 passengers and four crew members on a flight from Kaohsiung to Makung during stormy weather in the wake of Typhoon Matmo.
The ATR-72 aircraft had been scheduled to leave Kaohsiung at 4 p.m. but departed at 5:43 p.m. because of the poor weather. The pilot was reportedly asked to wait until 7:06 p.m. before being allowed to land.
A first attempt at landing reportedly failed, and the pilot then made a request to make a second try, reports said. Shortly later, the control tower lost contact with the flight, reports said.
The plane reportedly smashed hard into the ground in the township of Huhsi, causing a fire involving two homes. Online pictures showed a heavily damaged house and wreckage from the plane.
There was no immediate information about what caused the pilot’s change of plans and how the passengers were injured, though media reports spoke of a fire and of the injured suffering burns. They were taken to the military Tri-Service General Hospital in Makung, reports said, with cable stations reporting that one person showed no signs of life upon arrival.
The pilot was identified by the media as 60-year-old Lee Yi-liang and his co-pilot as Chiang Kuan-hsing, 39, but their fate was not immediately known. Each had more than 20,000 flying hours on their record, according to media reports.
First suspicions hinted that the accident might be linked to Typhoon Matmo, which passed over Taiwan and Penghu earlier in the day, bringing strong winds and heavy rains in its wake.
Online messages posted by residents spoke of a house on fire, with the blaze raging so hard that the rain failed to extinguish it.
Makung Airport was closed down after the incident, forcing six flights to change courts and return to Taipei’s Songshan Airport. In the capital, Premier Jiang Yi-huah was preparing a visit to the Civil Aeronautics Administration, reports said.
A team from the CAA, aviation experts and relatives of the victims were planning to fly to Makung on Thursday.
Over the past 13 years, TransAsia Airways recorded eight accidents, including six with the French-Italian ATR-72, the Chinese-language Apple Daily wrote.