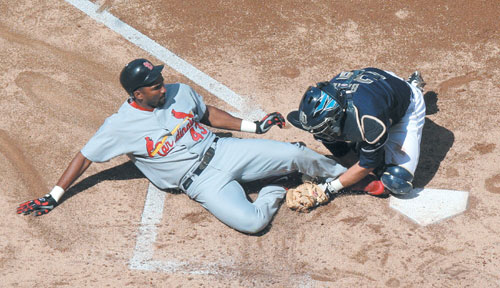 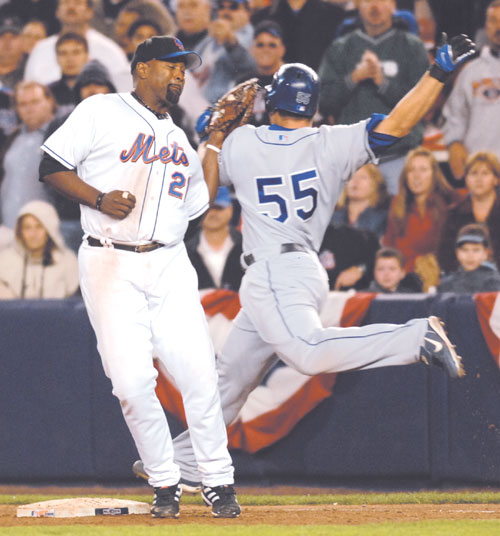 There is always the possibility Greg Maddux will entangle the Mets with their own weaponry Saturday, and that the Dodgers will brutalize whoever the Mets pitch Sunday, and that Derek Lowe will look 8 feet tall on Shea Stadium's mound Monday, and the Dodgers will move on.
Playoff pendulums have swung on less. Don't look back, something might be gaining on you, as both Satchel Paige and Jeff Kent have said.
But the probability is that the Mets, 2-0 leaders in this division series, will figure something out in L.A. during the next nine or 18 innings.
If they do, the epitaph on the Dodgers' season will read: Why Couldn't They Keep Playing Colorado?
The Dodgers lost, 4-1, here Thursday, thanks to Tom Glavine's skills and the Mets' offensive discipline. The Dodgers have played winning teams 59 times this year and have won 19 of those games. You're struck by the fact that (A) that's not a lot of games against winning teams and (B) it's no longer a coincidence by now.
The Dodgers have enough talent, experience and moxie to beat the lame, poor and mediocre. When they play the best teams, their weaknesses no longer float.
They need home runs and a supple bullpen and a general tightness of execution, and they don't have enough of those. At least not against the best team on the National League on its own bleak turf.
The Mets couldn't scratch rookie Hong-Chih Kuo when they met him here on September 8. They got three hits, no runs and struck out 12 times in six innings.
More familiar with Kuo
But on Thursday, Kuo was not an unknown slider artist with the element of surprise. He suddenly was the first pitcher ever to carry one career victory into a postseason game. Glavine, his opponent, brought 290. And the Mets brought their VCR.
"I remember him from the first game," Cliff Floyd said of Kuo. "He had that nasty slider. We hadn't seen him, so we went back and looked at the film. If you take away one pitch from a guy, then that puts him in a different element. Those sliders aren't strikes and that was our plan, to quit chasing them."
In the first two Mets innings, nobody swung at Kuo's first pitch, and it took him 37 pitches to get to the third. Floyd himself enjoyed a 13-pitch at-bat. In the fifth, ex-Dodger Jose Valentin fell behind 0-and-2 and then took four balls, eventually scoring on Paul LoDuca's sacrifice fly for a 2-0 lead.
Kuo did not make it through the fifth.
"They were very patient," Dodgers catcher Russell Martin said. "We got Floyd out on that at-bat, but when you're battling like he was, it takes something of a pitcher, yeah."
"The first time I faced him (Kuo) tonight, I got to 3-and-0 and then took a couple of sliders and lined out on a fastball," Valentin said. "So I was going to be patient the next time. The 2-2 pitch was a fastball up, but the rest of them were sliders, and we weren't going to chase them. That's what good teams do, adjust.
"And we were able to get into their bullpen early, and they don't have the strongest one."
Dodgers leadoff batters were 0 for 9 and nobody got a hit with a runner in scoring position. J.D. Drew took a third-strike fastball from Glavine with runners on first and second in the fourth.
Meanwhile, Kuo was wild-pitching Endy Chavez to second after Glavine twice failed to get a bunt down, and Chavez eventually scored on Jose Reyes' grounder, which Rafael Furcal charged but couldn't handle cleanly.
And in the Mets' sixth, Furcal was a bit tentative on what should have been a double-play ball by Julio Franco, who officially turned 48 in September but had a younger brother who ruled Spain for 36 years.
Because Franco beat out that four-hopper, Floyd could score from third.
"When I hit the ball? I never think double play," said Franco, who hit .273 this year and has vowed to keep playing until he is 50. "I always think positive."
"I thought it was two," Floyd said. "But the shortstop had to charge real hard. It didn't look like he did. I thought he'd be more on point in that situation. In any event, that was a big run."
Reyes' subsequent single - and he wouldn't have been hitting if Franco had been doubled up - created a bigger run, the one that made it 4-0.
The sight of Nomar Garciaparra jarring his bad quadriceps on a fourth-inning single was the capper, sort of like a flat tire in the parking lot at the end of a four-hour flight delay.
The Dodgers scrambled out of New York much quicker than Walter O'Malley did.
Their return to L.A. brings promise. Unfortunately for them, it doesn't bring the Rockies, Reds, Marlins or Diamondbacks.