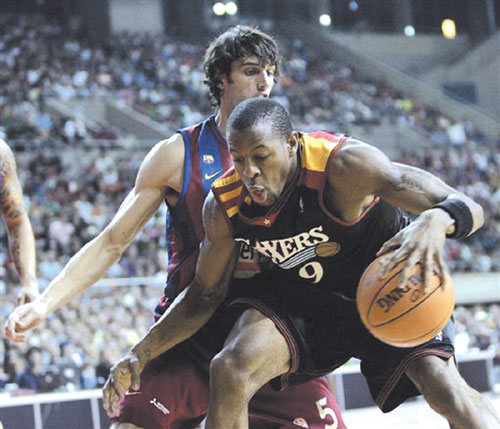 For the Philadelphia 76ers, it was an exhibition game. To their European hosts, it was anything but.
The Sixers wanted to test new defensive concepts and try some combinations Thursday night in their preseason opener. Winterthur FC Barcelona played as if the game meant much more and defeated the team from the mighty NBA, 104-99, before a frenzied sellout crowd of 16,236 at Palau Sant Jordi.
The game marked the first loss for an NBA team on European soil since the 1987 McDonald's Open. Winterthur became the first European League-affiliated team other than Maccabi Tel Aviv to beat an NBA squad in a game sanctioned by the NBA, improving a record that had stood at 4-29 going into Thursday night.
The NBA, which was excited about sending four teams across the Atlantic for training camp, and commissioner David Stern, who watched the game in person, had to be a little red-faced.
"It's just like Mo (head coach Maurice Cheeks) was telling us before the game," said Allen Iverson, who received the loudest cheer of any player on either team in pregame introductions from the spectators, hundreds of whom wore Iverson's No. 3 jersey. "It's like a lose-lose situation."
You could say the Sixers played like a team in their sixth day of training camp. They committed 21 turnovers, watched the home team - which already is into its regular season - run a dizzying array of screen and rolls that confused them.
But any NBA player should be able to emerge from a long off-season and convert free throws. The Sixers did not, missing a staggering 22 of 48 attempts from the line. The Barcelona team made just as many free throws (26) on 19 fewer tries.
"That's what happens," Iverson said. "When you miss free throws and you don't defend, you get beat."