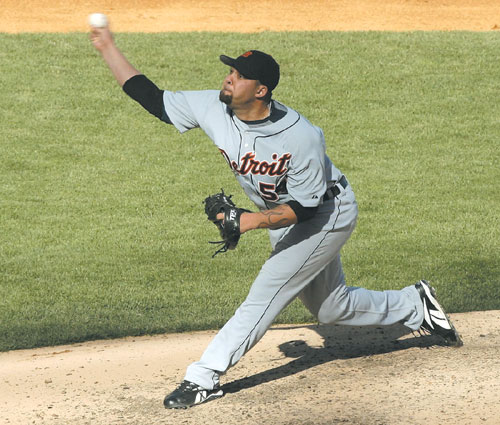 Joel Zumaya stopped thinking about the scouting reports and stopped stealing glances to the bouncing, booming Stadium sellout and stopped searching for the scoreboard light bulbs recording his 102-mile-per-hour pops into Pudge Rodriguez's mitt.
He was the Yankees' worst nightmare, a 21-year-old rookie with flame tattoos down his left arm and a burning desire to throw the ball past the ghosts and goblins and immortal sluggers on these Yankees.
"I'll tell everybody: Hey, I've got a fastball and it reaches triple digits and I'm going right after you," Zumaya said.
He was standing in the visiting locker room now, holding a Corona Lite and laughing a knowing laugh upon being told that Alex Rodriguez swore he never saw those final three pitches blow past him, 101 and 102 mph in the eighth inning Thursday. Here's the thing: Zumaya looked like he wanted to be in the middle of Yankee Stadium, in the middle of October, far more than the perpetually unraveling A-Rod.
"I really wanted to pitch at Yankee Stadium," he said. "I know how you can buckle really fast; they'll get you down. But I really wanted to prove something today."
The Tigers delivered an unmistakable message in that telltale 4-3 victory over the Yankees at the Stadium. All those live arms, all those defiant dispositions, all that curmudgeon managerial nerve has conspired to take control of the American League Division Series, take it back to Detroit for the first baseball playoff game in 19 years.
So much for the Yankees as the steamrolling bully in these playoffs. So much for the spiraling Tigers bending to the will of the monolith. The Tigers punched back and punched back hard on Thursday.
Zumaya would be responsible for five outs, ending the seventh and eighth innings, punctuating his performance with whiffs of Derek Jeter, Jason Giambi and A-Rod. There were two outs in the eighth when Rodriguez moped to the plate, two strikeouts on his day for Game 2, including on three pitches in the first inning, his bat staying on his shoulder upon getting frozen on a sweeping curveball.
The boos had come, and come hard, and now Zumaya knew the circumstances, sensed the blood in the water with A-Rod, and regretted throwing an off-speed pitch to start his at-bat. "I really didn't want to throw a curveball," he said. "I wanted to go after him with fastballs. A-Rod's a great hitter, but I don't back down. I'm going to go right after [him]."
After three straight strikes, Rodriguez turned to the umpire and asked if he had seen those pitches, but A-Rod swears he never did. Now, A-Rod was standing at his own locker on Thursday, one more interrogation on the boos, on an 0-for-4 that leaves him 4-for-35 with no RBI in his past 10 playoff games for the Yankees - 5-for-40 with two RBIs going back 11 games. Behind him on his locker shelf, there were two books, "Awakening the Buddha Within," and "10 Secrets for Success and Inner Peace."
"I'm having a good time," A-Rod said.
Yes, he's having a ball. They tried to give him a lift here, tried to cheer his every step to the plate, but Rodriguez is making it hard on himself. He's digging himself back into a hole, back into that paralysis that grips him at the plate. It's a self-fulfilling prophecy with him, and none of the answers can be found in those self-help books in his locker.
Suddenly, the Yankees are thrust into a volatile circumstance, 1-1 in the best-of-five serves returning to Detroit, praying that Randy Johnson's epidural keeps his back from giving in, praying that A-Rod hasn't gone back into the postseason tank.
The Tigers resemble the Angels who knocked the Yankees out of two American League playoff series in the past five years, a bunch of hard-throwing young arms out of the bullpen that confound the Yankees' sluggers.
They have an edge to them, a swagger, and now they've got belief. They were angry with the way Major League Baseball officials jerked them around on Wednesday night, telling the Yankees long before them that the game had been rained out. It was one more way for Jim Leyland to sell his players on the belief that no one thinks his Tigers belong here, that no one takes them seriously as an October team now.