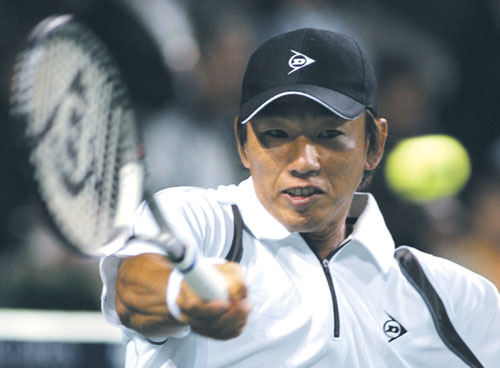 Roger Federer didn't let the effects of a disturbing nightmare get in the way of a win over Japan's Takao Suzuki in the quarterfinals of the Japan Open.
Federer rallied from a shaky start yesterday to edge Suzuki 4-6, 7-5, 7-6 (3) and advance to the Japan Open semifinals.
As scary as Federer's start was yesterday, it was nothing compared to the night he had before his quarterfinal showdown when he awoke in the middle of the night because of a bad dream.
"I jumped out of bed and stood up screaming in a state of shock," said Federer. "I didn't know where I was. I ran and hit the corner of the bed and I have a big bruise now on my leg. It was a pretty scary moment."
Federer blamed the bad dream on a sake bomber he had before going to bed on Thursday but was in fine spirits after booking a place in the semifinals.
Struggling with his return, Federer dropped the first set to Suzuki, who recently recovered from a shoulder injury and is playing in his first ATP tournament since the Australian Open in January.
"It was a difficult match and I was afraid I might lose it," said Federer. "He mixed up his serves well and hit all the corners. I got a bit of luck here and there in the third set which helped."
The top-ranked player finally found his rhythm in the second set and broke Suzuki for the first time in the final game after being down 30-love.
Suzuki, ranked 1,078th in the world, kept pace with Federer in the third set, holding serve in the 12th game to force the tiebreaker.
"Not returning more of his serves was the only part of my game today that I maybe wasn't happy with," said Federer. "But that had a lot to do with my opponent and how well he hit the ball."
Plagued by inconsistency
Federer, playing in his first tournament since winning the U.S. Open last month, has been inconsistent in his Japan debut.
The Swiss star struggled through his opening match against qualifier Viktor Troicki before returning to form in the third round Thursday with a convincing 6-2, 6-1 win over defending champion Wesley Moodie.
Federer will next face German No. 14 Benjamin Becker, who defeated fifth-seeded Jarkko Nieminen of Finland 6-7 (5), 7-6 (6), 6-4.
Even though he lost, Suzuki said he was pleased with his performance.
"I felt really good playing the World No. 1 on center court," said Suzuki. "I didn't really have a game plan, I just got caught up in the moment and am happy I played so well today."
Earlier Friday, No. 10 Henman overcame a slow start to defeat Argentina's Juan Martin Del Potro 7-6 (3), 6-3 and advance to the quarterfinals.
Henman was to face Croatia's Mario Ancic in the quarterfinals late yesterday. The winner of that match will play South Korean No. 9 Lee Hyung-taik, who knocked out second-seeded Tommy Robredo of Spain 7-6 (3), 4-6, 6-1.
Henman has not reached a top tier tournament final since Indian Wells in 2004 and his ranking has dropped from a career-high No. 4 in 2002 to No. 55.
Third-seeded Ancic, who was runner-up here last year, defeated Germany's Rainer Schuettler 6-2, 4-6, 6-4 in yesterday's other third round match.