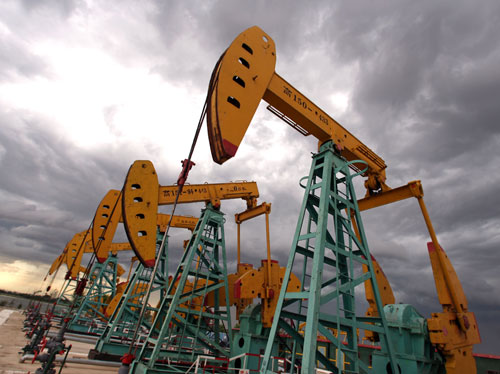 When Jiang Dama throws open her curtains each morning in the gritty northern China oil town of Daqing, she's confronted by the sight of a four-story-high "nodding donkey" pumping away in the garden of her walk-up apartment building.
Jiang, 72, a retired oil worker, says she finds the presence of the oil pump, known in China as a kowtow machine, reassuring.
"As long as it keeps kowtowing," said Jiang, "I know this town can survive."
Daqing, the largest oilfield in China, has been in production since 1959 and was once a metaphor for the strength and self-reliance of Mao Zedong's New China. Today, it symbolizes the country's energy crisis: soaring demand and stagnant or declining domestic production.
By 2010, Daqing's annual output will shrink to 40 million metric tons of oil from a 1997 total of 56 million metric tons, the equivalent of 1.1 million barrels a day. China still depends on Daqing for one-quarter of its oil production, and it honors the city of 2.46 million accordingly.
In a central square stands a statue of "Iron Man" Wang Jinxi, a model worker of near-superhuman strength who, before dying of cancer at age 56, broke productivity records. Communist legend has it that he once jumped into a cement mixer to use his body as a stirrer and prevent it from freezing.
"In industry, learn from Daqing" became a slogan in the 1960s and 1970s. The city, which sprawls over 21,000 square kilometers of Heilongjiang (Black Dragon River) province 1,200 kilometers north of Beijing, is built on top of the oilfield. Oil pumps can be found nodding away in every corner of the urban area and across the vast grasslands that stretch over the Russian border into Siberia.
"Every inch of this town is black gold," said Jiang, the retiree. Daqing is still a company town, home to 11 units of China National Petroleum Corp., the holding company for publicly traded PetroChina Co. One of the best lodgings in town is called the Petroleum Hotel. The main medical facility is General Oilfield Hospital. The central plaza is Iron Man Square.
"We adopt the Iron Man spirit," say slogans on boards outside of oil company offices and karaoke bars. That can-do attitude is still alive.
"Daqing is just like a middle-aged man," Mayor Han Xuejian says. "We're not young anymore, but we're still in the prime of life."
Production from Daqing will be maintained at 2005's level of 45 million metric tons for the next five years, said Han. Meantime, the mayor is looking to build other sources of revenue for the town.
New discovery
Han, 45, is seeking US$31 billion of investment to attract non-oil manufacturing industry, tourism and agriculture-based businesses to the city and says he hopes that in four years, only 50 percent of the economy will be based on oil.
PetroChina, for its part, is still trying to find more oil in the area and estimates Daqing's production will stabilize at 40 million tons annually for a decade following 2010.
Last month, China's biggest oil company said it found new reserves equivalent to 390 million metric tons of oil (2.9 billion barrels) on the edges of the city. The additional oil would be enough to supply the country for 403 days, based on estimates of 2006 consumption.
China, the world's biggest oil user after the U.S., may consume 6.5 percent more of the fuel this year, with demand reaching 7.1 million barrels a day, the International Energy Agency said in a September 12 report. Demand may rise 5.5 percent to 7.4 million barrels a day next year, it said.
Much of the increase may have to come from abroad as China's other major oilfields aren't faring much better than Daqing. Production growth at Shengli, the nation's second-largest, run by China Petroleum & Chemical Corp., has stalled. Having peaked at 33.6 million tons in 1991 it presently averages 27 million, according to the company, known as Sinopec. Liaohe, China's third-largest field, is in decline.
PetroChina, Sinopec and Cnooc Ltd., China's biggest offshore oil producer, are trying to increase output in countries from Indonesia to Iran to keep up with demand.
At the oilfields on the outskirts of Daqing, where the cloying smell of crude permeates the air, Mu Ye, 28, and his buddy Ren Fazhi, 26, need all the iron man spirit they can muster.
Hot and cold
In winter, temperatures plunge to minus 36 degrees Celsius. In summer, the grassland swelters in 30-degree-plus heat. For maintaining the massed ranks of kowtow machines, each earns 1,200 yuan (US$150) a month, plus a bonus depending on performance.
"Who likes this job?" asks Mu with a grin. "It's too hot in summer, too cold in winter, and we're in the middle of nowhere."
Mu has noticed it's not as easy to get oil these days.
"Previously, you could drill here and the oil would spurt out," he said. "That never happens now. You need these kowtow machines, and even then, a lot of what you pump out is water."