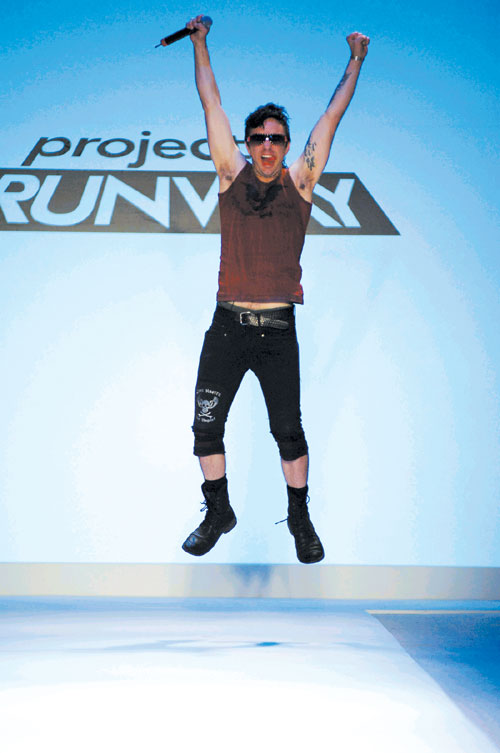 Jeffrey Sebelia's tattooed neck - including a large "Detroit" - is a bold enough statement on its own.
Still, it's Sebelia's trash-talking mouth that has made him a bad boy of reality television.
Viewers of Bravo's hit series "Project Runway" tend to treasure Sebelia's oh-no-he-didn't moments.
To cite a few, he made Angela's mother cry and wished that Laura would have a stroke.
Sebelia always raises eyebrows, and he's doing it again.
Recently, an item on New York magazine's Web site aired accusations that Sebelia had outsourced the sewing for a challenge that will determine the "Project Runway" winner.
Bravo isn't commenting on the rumors, which spread to fans through a link on a popular Web site, BloggingProjectRunway (bloggingprojectrunway.blogspot.com).
Sebelia wasn't available for comment, either.
Whatever the truth is, the gossip should only add to the hype for the show's finale, which airs next month.
But wait, there's more news.
Sebelia's work is turning heads in metro Detroit, where blazers, jackets and coats from the fall line of his label, Cosa Nostra, are now available at Royal Oak, Michigan's Dolce Moda boutique.
The Los Angeles-based label, which counts Gwen Stefani and Billy Bob Thornton among its clients, was created by Sebelia before he joined "Project Runway."
Dolce Moda owner Jenny Ouliguian says she's the only person in the region carrying Cosa Nostra, which is sold at exclusive stores like Harvey Nichols in London and Maxfield in Los Angeles.
She discovered Cosa Nostra on a visit to a showroom in New York that carries avant-garde clothes. She was drawn to the rock 'n' roll pieces, which run from about US$700 to US$1,500, and decided to carry the line.
"Next thing you know, I see 'Project Runway,'" says Ouliguian with a laugh. "It was quite a shock as well."
The Cosa Nostra separates, which arrived a few weeks ago, have generated buzz from shoppers who don't realize they're made by Sebelia, says Ouliguian.
She's in talks to bring the designer to Royal Oak, Mich., for a trunk show.
The flurry of gossip over the sewing issue doesn't bother her at all.
"I say if you're not controversial, then you'll be boring," says Ouliguian. "It's all about controversy."
On Wednesday's episode of "Project Runway," the remaining four designers - Sebelia, Laura Bennett, Uli Herzner and Michael Knight - found out, as usual, who's in and who's out. Based on past seasons, one designer was expected to be dropped. But in a twist this go-round, all four finalists are still in.
There'll be a two-part finale October 11 and 18.
The foursome already revealed their collections for Season 3's ultimate challenge during a runway show held Sept. 15 during New York Fashion Week.
Last season, four finalists presented collections in New York, but one was a decoy. Only three designers actually competed in the Season 2 finale.
Some local viewers think Sebelia has a real chance of winning - if he's not disqualified.
"His collection surprised me," says Tiffany Dantzler, 26, of Royal Oak, a meeting and events planner who saw photos of the runway show online.
"I didn't like anything he made on the show. I loved everything in his collection."
Dantzler describes herself as Knight's biggest fan. But she admits Sebelia says the most entertaining things.
"Even though it's mean, he ends up being really funny," she says.
Kate Bennett, 26, a fashion designer from Rochester Hills, Michigan, says Sebelia has always been her favorite.
"I love the stuff he does," she says. "I think his fashions are different and fun and young. I love his attitude. You never know what he's going to do."
Detroit area viewers also love it that their city's name is inscribed on Sebelia's neck. The elaborate tattoo contains the name of his toddler son, Harrison Detroit, and the phrase "the love of my life" in Italian.
Sebelia's girlfriend hails from metro Detroit, and her relatives have used Detroit before as a middle name.
Says Dantzler of the tattoo, "It's really kind of distracting, but it's cool. It's cool to see Detroit on national TV."