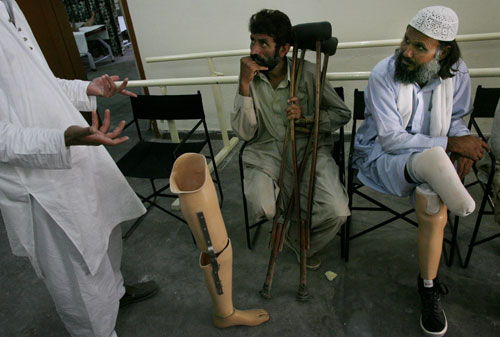 Their town sits right on an active geological fault skirting the western Himalayas.
When the plate shifted a year ago, about 8,000 of Balakot's 40,000 population died, a disproportionate number of them children sitting in classrooms when the walls and ceilings of their schools caved in.
A geological survey confirmed what the earthquake on October 8, 2005 made sadly obvious - Balakot is a dangerous place to live.
The small town in Pakistan's North West Frontier Province suffered even more intense devastation than Muzaffarabad, the ruined capital of Pakistani Kashmir.
The government declared it a "red zone," meaning no new construction would be allowed, and floated proposals to relocate the town to a new site 22 kilometers away.
But for all their grief, many of the survivors are too emotionally attached to leave their place on a mountain slope above the Kaghan river.
Having lost five members of his family in the quake, vegetable seller Mohammad Iqbal epitomizes the sense of fatalism pervading the town.
"Red zone or no red zone. Life and death is in God's hands. This is our land, it belonged to our ancestors. The government should just allow and help us reconstruct our houses," he said, while bringing bread for the daily ritual of breaking fast during the Muslim holy month of Ramadan.
While the people in Balakot are digging in their heels, so are the 1,600 families in Bakriyal area, who would be displaced if the town was shifted.
"All of us have said we are not interested in vacating or selling our land and we want to stay here. They should look at some other land," said Hukum Dad, one of the farmers growing tobacco, vegetables and corn in the fertile soil in the rolling landscape ringed by the foothills of high mountain ranges.
"Where will we go if they take over our land? We have farmed this land and it has belonged to our ancestors," Dad asked.
Not finalized
President Pervez Musharraf, addressing representatives from international donors on October 5, was adamant Balakot will be moved to Bakriyal.
"A new town, a better town, in a seismic-free zone is going to be built," the president said.
But the government is still carrying out a topographical survey of the area, and the project, district administrators say plans are not finalized, is still very much in the balance.
"The talk about the new Balakot town is not final as yet. It is up in the air now because some people are protesting over it and some don't want to shift from the old Balakot town," said Javed Khan, a program director in the district reconstruction unit.
If the rebuilding process has been slow elsewhere in the quake zone, the plight in "red zones" is even worse.
The rubble has been largely cleared, but a year on people in Balakot are living in a squalid limbo, not knowing what the future has in store.
Five thousand houses were destroyed, and many of those left are missing walls. This is a rigidly conservative society and families have put up sheets to segregate the women.
Still living in tents and pre-fabricated shelters, with no drinking water on tap or sanitation available to them, people see no point in celebrating the Eid al-Fitr festival once Ramadan ends in late October.
"There will be no Eid celebration for us. It will be just another day to mourn our dead," said Iqbal.
Sitting in his dirty tent, with just two mattresses and a few items of warm clothing, the very thought of Eid makes Ghulam Jillani snap: "We are human beings and not animals. For how long does the government expect us to live in these conditions?"
Haunted by memories of the horror a year ago and the 40 members of his extended family who died, including his brothers and grandchildren, the 58-year-old man knows no peace of mind.
"We have money problems and we don't have the means to feast when breaking our fast," he explained as his wife offered tea, prepared on a kerosene stove as night fell over the town.
Lost time
Sardar Mohammad Yousuf, the mayor of Mansehra district, which Balakot belongs to, said people needed to be patient.
"We understand the frustration of the people of Balakot. But it does take time to recover completely from a natural disaster of such massive scale," he said.
"It is true it would take three to four years to shift the survivors of Balakot town to their new, safer dwellings, but we are ensuring with the help of ERRA and aid agencies to provide them drinking water, sanitation, schools and decent shelters," he said, referring to the government's Earthquake Reconstruction and Rehabilitation Authority.
Given the slow pace of reconstruction, townsfolk fear they could end up living in makeshift dwellings for years.
An official from the U.S.-based relief organization International Rescue Committee said bureaucracy was costing precious time.
"Aid agencies are not given permission to build permanent shelters for the survivors. If any NGO or agency submits a plan for some rehabilitation project it is either approved or rejected not before three months, so valuable time is wasted," he said.