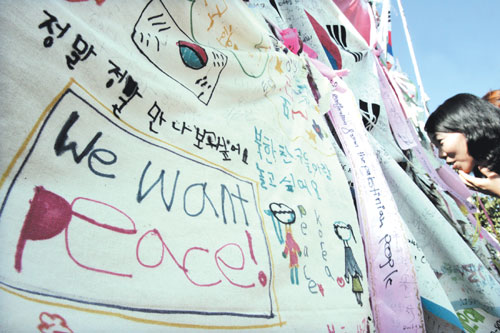 To cheers of "Fight at the cost of our lives," North Korean leader Kim Jong Il reportedly gathered top military commanders for a rally and urged them to bolster defenses, amid mounting international fears of an imminent nuclear test by the North.
The meeting was the reclusive leader's first reported appearance in three weeks and the first since Tuesday when his government shocked the world by announcing plans to detonate an atomic weapon.
Media reports have speculated that a test could come as early as tomorrow, the anniversary of Kim Jong Il's appointment as head of the Korean Workers' Party in 1997. Japan said it was stepping up monitoring of North Korea in light of that speculation.
"In consideration of various possibilities, we are preparing for whatever may happen," Chief Cabinet Secretary Yasuhisa Shiozaki said in Tokyo.
Kim congratulated the battalion commanders and political instructors for "bolstering the Korean People's Army as invincible revolutionary armed forces," the country's official Korean Central News Agency, or KCNA, reported late Thursday.
Kim also urged them to "further strengthen the battalions," KCNA said.
Attendees responded with "stormy cheers of 'hurrah'" and chanted slogans such as "Let's fight at the cost of our lives for the respected Supreme Commander comrade Kim Jong Il," "Human bullets and bombs," and "Devoted defense," KCNA said.
It was unclear when the rally took place, or how many attended, but it could show that Kim is trying to polish his credentials with the military at a sensitive time when the international community is stepping up pressure on Pyongyang to scrap any plans for a test.
Both North and South Korea were observing the Chuseok thanksgiving celebration yesterday, one of the two main Korean public holidays.
Kim's last reported public activity was last month when KCNA reported on September 15 that he visited the scenic Diamond Mountain near the border with South Korea.
The North claims to have nuclear weapons, but hasn't performed any known test to prove that. Six-nation talks aimed at persuading North Korea to abandon its nuclear ambitions have been stalled for almost a year, and North Korea says it needs an atomic arsenal to deter a possible attack from the United States.
Washington has repeatedly said it has no intention of invading North Korea.
Japan top government spokesman said yesterday that Tokyo is stepping up monitoring of North Korea to detect a possible atomic detonation.
Japan has two intelligence-gathering satellites and launched a third in September that can monitor the North's nuclear weapons and missile programs.
On Thursday, a U.S. military plane capable of detecting radiation took off from Okinawa in southern Japan, thought to be a monitoring exercise in case North Korea carries out a test, according to media reports.
Overnight at the United Nations, Security Council experts reached agreement on a statement urging North Korea to cancel its planned nuclear test and return immediately to the six-nation talks. But the text needs final approval from council members.
Japan's U.N. Ambassador Kenzo Oshima said a statement "most likely" would be approved and read out yesterday morning after capitals give final approval.
The original Japanese draft expresses "deep concern" over North Korea's planned test and urges the North not to carry it out.
It warns Pyongyang that a nuclear test would bring international condemnation, "jeopardize peace, stability and security in the region and beyond," and lead to further unspecified council action.
The Japanese draft also urges North Korea to return immediately to six-party talks on its nuclear program and work toward implementation of a September 2005 agreement in which the North pledged to give up its nuclear program in exchange for aid and security guarantees. The six-party talks involve the two Koreas, the United States, China, Japan and Russia.
North Korea has boycotted the six-nation talks since late last year, angered by American financial restrictions imposed over the North's alleged illegal activities such as money laundering and counterfeiting. While all council members view the possibility of a North Korea test with alarm, there were different views on how to approach Pyongyang's announcement.
A test would separate the reality from the rhetoric of North Korea's nuclear boasts, said Larry Niksch, a specialist in East Asian security issues with the U.S. Congress' independent research service.
"I think clearly they're capable of testing a nuclear explosive device," Niksch said, giving personal views, not those of Congress.