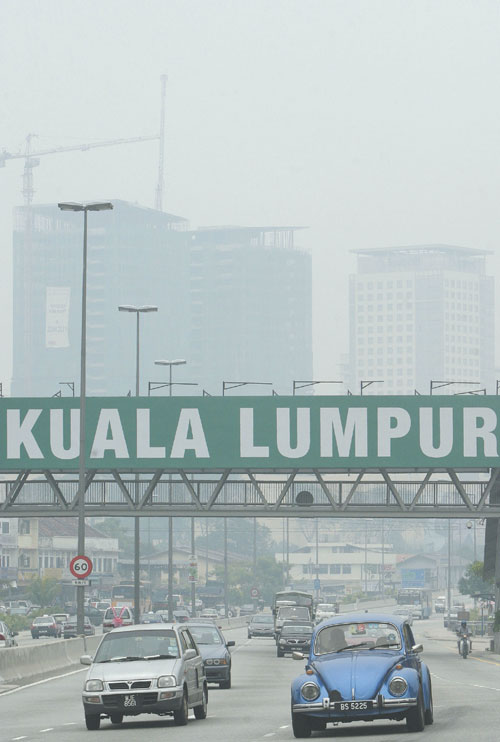 Thick smoke from bush and forest fires in Indonesia has forced schools to close and brought misery to residents, officials said yesterday.
In Malaysia, also hit by the smoke, the environment minister was quoted as lashing out at Jakarta, saying the problem would persist as long as the Indonesian government did not ratify the ASEAN treaty on haze.
Students in Palangkaraya, the capital of Central Kalimantan province, and other areas on the Indonesian side of Borneo island have been told to stay at home since Tuesday due to the worsening haze, said Beryn, an official at the local education ministry.
He said he and his family had been forced to use masks even at home and people complained of headaches, nausea and respiratory problems.
"I'm telling you honestly, my eyes hurt. We breathe with difficulty and our throats are dry and itchy," he told Reuters.
The smoke from bush and forest forest fires on Borneo and Sumatra island is an annual regional hazard during the dry season but this year's haze appeared worse than last year, Beryn said.
"When I drive I have to turn on the headlights to see through the fog. Sometimes I can see fires on the left or right side of the road," he said.
Fires have also spread to the Sebangau National Park in Central Kalimantan, the head of the local natural conservation agency, Yohanes Sudarto told Elshinta news Web site.
Four firefighting teams had been sent to the park to extinguish the blazes, he said.
Neighboring Malaysia and Singapore have complained that the smoke from Indonesia has affected regional air quality.
Air quality in peninsular Malaysia appeared to have improved slightly yesterday. But the air quality readings in the Malaysian state of Sarawak on Borneo remained in the unhealthy zone.
"I was in Jakarta in June and met the relevant ministers," Azmi Khalid, Malaysia's environment minister, was quoted by the local Star newspaper yesterday as saying.
"They told me they had the systems to control the haze. It looks like their system is not effective," Azmi said. "Without this (ASEAN) agreement, everything stagnates."
Azmi said cloud-seeding operations in Sarawak had not been successful because there were not enough clouds.
Indonesia's Forestry Minister Malem Sambat Kaban on Thursday rebuffed neighboring nations' complaints, arguing that a tireless drive involving thousands of people and costing many thousands of U.S. dollars was under way to put the fires out.
Environmental group Greenpeace urged Jakarta on Thursday to "break the cycle of fire and haze" threatening the health of millions across the region.
It blamed big industrial concerns for being behind many of the fires in Sumatra and Kalimantan, home to endangered animals such as orangutans, tigers and the Asian elephant.