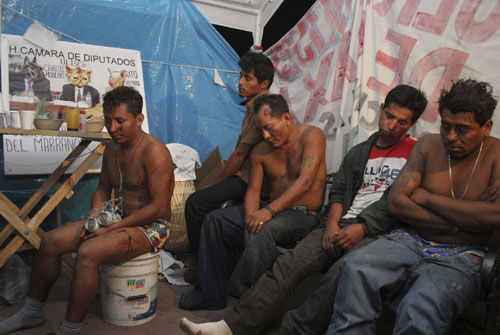 A teacher was hacked to death with ice axes in this historic Mexican city that has been paralyzed for months by protests and violence, police said late Thursday.
Thousands of trade unionists and leftists have been camped out in Oaxaca since May, building barricades, taking over buildings and burning buses. The protesters are demanding the resignation of Oaxaca Governor Ulises Ruiz, accusing him of rigging the 2004 election to win office and sending armed thugs against dissenters.
Victor Alonso Altamirano of the Oaxaca state police said teacher Jaime Rene Calva Aragon was on his way to a meeting Thursday evening when he was killed by two assailants wielding hefty ice picks.
Fellow teacher Alma Rosa Fernandez accused militant leftists of killing Calva for opposing a statewide teachers' strike. Fernandez, who also opposes the strike, said the dissident teachers have been receiving death threats.
"We blame this murder directly on the radical teachers wings," Fernandez said.
Florentino Lopez, a spokesman for the protesters, denied the accusation and instead blamed the governor.
"This is a plan by Ulises Ruiz to provoke the intervention of federal forces," Lopez told reporters and protesters in Oaxaca's main square.
The protests began when thousands of teachers went on strike to demand higher pay. After Ruiz sent police to try to dislodge the camps in June, the teachers were joined by a broad coalition of leftists, students, anarchists and Indian groups.
Ruiz denies the protesters' accusations against him and has repeatedly called for federal troops to restore order.
In recent days, helicopters and military planes have flown over the protesters while thousands of state police have gathered outside the city. Protesters broadcast alerts from occupied radio stations, fearing an onslaught was imminent.
Enrique Rueda, head of the Oaxaca teachers union, traveled to Mexico City Thursday and met with Interior Secretary Carlos Abascal to try and resolve the conflict.
After the meeting, Rueda said Abascal promised he would not order soldiers to move against the protesters.
"We have the guarantee from the interior secretary that there will be no military incursion in Oaxaca," Rueda told a news conference.
The Interior Department later released a statement saying "the conflict in Oaxaca will be solved via the law and institutions." It did not comment on the use of soldiers.
Clashes involving protesters, police and armed gangs have already left two people dead, and both the U.S. and British embassies in Mexico have issued advisories warning their citizens about going to Oaxaca.
The unrest has scared most tourists away from the city, which is normally popular for its colonial architecture and ancient pyramids. Business leaders put losses at more than US$300 million.
Ruiz has been supported by other governors from his Institutional Revolutionary Party, or PRI, which held the Mexican presidency from 1929 until 2000.