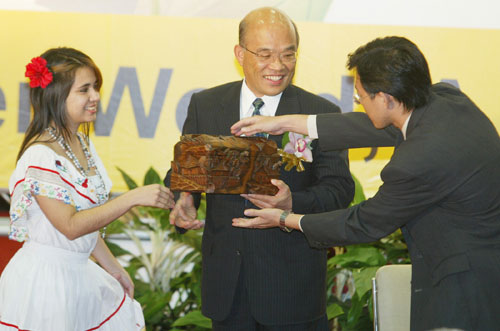 Premier Su Tseng-chang (蘇貞昌) urged the public Thursday to put aside their differences and join together to celebrate October 10 National Day.
The premier made the appeal as organizers of an anti-graft campaign said they will unveil the details of a "besiege the Presidential Office" plan today to step up pressure on President Chen Shui-bian (陳水扁) to resign over alleged corruption scandals.
The organizers hope to recruit 5,000 "nonviolent activists" - mostly women - to block the front and rear entrances of the Presidential Office October 10, an action they claim will prevent President Chen from entering or leaving his office. The activists will be at the forefront of tens of thousands of other protesters.
The premier, after hosting a tea party for foreign students in Taipei, said National Day is a major event for the nation and that the celebrations will be attended by foreign dignitaries from the nation's allies.
"Irrespective of one's political stance, one should put aside that political stance to create a good atmosphere," he said.
Foreign Affairs Minister Huang Chih-fang said the issuance of invitations to the foreign dignitaries has been going smoothly and added that two national leaders will also come.
Asked if the ministry has explained the plan to besiege the Presidential Office to the foreign dignitaries, Huang said they had not been told about the possibility of disturbances, adding that political squabble is normal in a democratic country.
Huang also said that since renovation work at the venue of the National Day banquet - the Taipei Guest House - was only completed this year, the invited guests will enter in two stages, in order to protect the historic site.