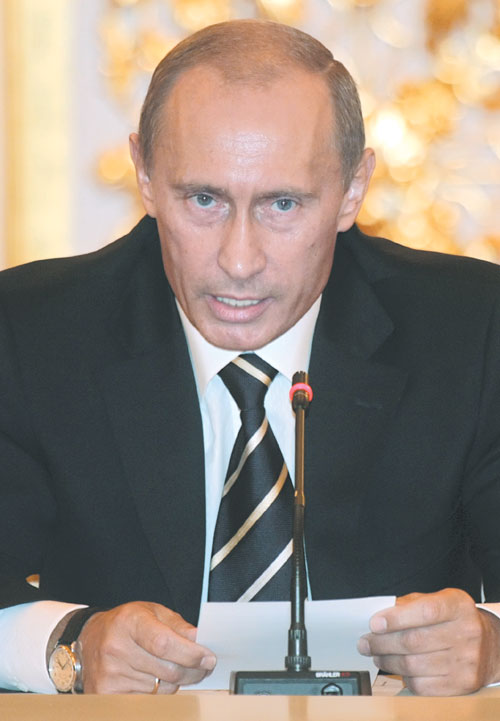 Who will blink first? The leaders of Russia and Georgia are locked in a contest of political wills that appears to be fueled as much by their styles as by the grievances piled up between the neighboring nations since the Soviet collapse.
Georgian President Mikhail Saakashvili - whom some pro-Kremlin protesters have caricatured as Hitler - minces no words when describing his quest to restore Georgia's territorial integrity and full independence, and that means resisting what he calls Russia's bullying.
He came out swinging at the U.N. General Assembly last month, accusing Russia of the "gangster occupation" of parts of his country and of condoning ethnic cleansing.
Russian President Vladimir Putin has condescendingly referred to Saakashvili as a hot-tempered native of the Caucasus, a region Russians associated with warring tribes, wily traders and banditry.
When Saakashvili tried to arrange a meeting with Putin last summer to reduce escalating tensions, the Kremlin said Putin was too busy. And Putin, a former KGB agent who has stuffed Russia's ruling elite with one-time secret service colleagues, has ironically likened the actions of the Georgian leadership to the policies of Lavrenty Beria - Josef Stalin's henchman who ran the precursor to the KGB.
Georgians respond to Putin's barbs with a touch of bravado, joking that the tall Saakashvili is "the big dictator of a small country, and Putin the small dictator of a large one."
By now, Putin and Saakashvili have dug themselves so deeply into their political trenches that it's hard to imagine who will be the first to cave in.
Behind each leader stands an army of politicians and aides eager to outdo each other in devotion to the national interest.
After years of mutual verbal sparring, Georgia last week arrested four Russian military officers alleged to be spies. Russia responded by suspending the issuance of visas to Georgian citizens and slapping a transport and postal blockade on Georgia. Police in Moscow have closed down several casinos suddenly discovered allegedly to be run by the Georgian mafia and have combed marketplaces and restaurants to detain and deport Georgians without work permits.
"The Kremlin has driven itself into a dead end: it can end sanctions without losing face only if it forces Saakashvili to his knees," Moscow-based political analyst Dmitry Oreshkin told The Associated Press. "The Georgian elite also can't conduct any rational talks with Russia without losing face. Bilateral ties have been spoiled for good."
Russian Foreign Minister Sergey Lavrov said the sanctions will stay in place until Georgia changes its anti-Russian course.
"That's only the start of our sanctions,we could exert such a pressure on them that even a mouse wouldn't sneak through," boasted Andrei Kokoshin, the head of Russian parliament's committee for ties with ex-Soviet nations.
But Georgia looks unlikely to bend. Beyond Saakashvili's natural inclination for dramatic steps, defiance appears to be Georgia's strategy for attracting Western support and pressing its case to join NATO.
Putin's strategy in applying such unprecedented pressure against a former Soviet republic is less clear.
"The hawks in the Kremlin don't have any positive program," Oreshkin said. "They aren't pursuing any long-term strategic goals; all they want is to punish Georgia and hit it hard."
Several Russian politicians have already raised the prospect of cutting natural gas to Georgia, but such a move would also block supplies to Russia's closest ally in the Caucasus, Armenia.
Some Russian commentators said the Kremlin apparently hoped that the burden of sanctions would encourage Georgians to unite against Saakashvili. But such hopes appear illusory: the blockade and Russian police crackdown on the Georgian diaspora would badly hurt ordinary people but Saakashvili would likely not be blamed. In fact, the perception of Russian interference could very well shore up support for the president, whose popularity has been falling amid persistent poverty and high unemployment.
"It looks like Russia needs to reach the limits of absurdity to realize that such pressure only makes Georgia more pro-Western," Georgy Nodia, the head of the Tbilisi-based Institue for Peace and Democracy and Development, told the AP.
Some pro-Kremlin lawmakers and political analysts have suggested that Russia could go so far as to recognize the independence of Abkhazia and South Ossetia and even move to incorporate them. South Ossetia has already scheduled an independence referendum next month.
However, an attempt to annex the separatist regions would effectively shatter Russia's already freezing ties with the United States and put it on a collision course with other Western nations - an outcome clearly not in the interests of the Kremlin striving for closer integration into the global economy.