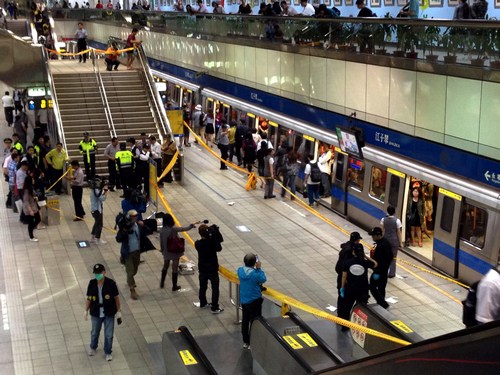 TAIPEI (Taiwan News) – Four people were reported dead and at least 21 injured Wednesday after a man attacked passengers with a knife on a Taipei Mass Rapid Transit train entering Jiangzicui Station in Panchiao, New Taipei City, reports said.
The attacker was subdued and taken to a prosecutors’ office for interrogation. He was later identified as Cheng Chieh, 21, a second-year environmental engineering student at Tunghai University in Taichung. He reportedly planned to commit the attacks after graduation, but did it on Wednesday because he had no classes that day, reports said.
The people who died were a 52-year-old woman named as Fan Pi-chu whose birthday was Thursday. The two men who died were Hsieh Ching-yun, 28, and Chang Cheng-han, 26, reports said. A 62-year-old woman, Lee Tsui-yun, was reported dead later in the evening in hospital.
The number of injured in the attack ranged from 21 to 28 depending on various media reports, with several still being treated for serious injuries to the chest and back. Hospitals sent 15 ambulances to the scene to evacuate the injured.
According to reports, a 21-year-old man wearing red boarded the train at Sun Yat-sen Memorial Hall Station, and not at Longshan Temple Station in Taipei City’s Wanhua District, as reported earlier. He was reportedly inebriated and began attacking people inside the last train car without reason at 4:26 p.m. He continued to wield a 20-cm-long knife as he disembarked at Jiangzicui and reached the station exit. Police arrived on the scene at 4:35 p.m., reports said. Normal MRT service resumed around 5 p.m.
After the attacker was arrested, Jiangzicui Station was temporarily closed off to passengers. TV footage showed a young man in a red polo shirt, black shorts and sneakers sitting against a wall at an MRT station, apparently with his hands tied between his back. Other footage shot earlier showed him walking slowly around the station platform while passengers tried to stay away from him. One passenger threw an object at him to try and stop him.
Later reports denied he was drunk, saying he had only consumed a fizzy beverage, with an alcohol test registering a level of 0.04. Cheng reportedly lived in Panchiao’s Haishan area with his parents and a younger brother. He studied at a local high school and was reportedly expelled from the National Defense University.
Tunghai University officials said they noted in April that Cheng had posted a statement online in which he said he was planning to “do great things.” He told police he showed no remorse for his acts, reports said.
A stabbing incident on a smaller scale, without fatal victims, happened just within the past few weeks. In the previous attack, a man attacked passengers with a knife at Guting Station.