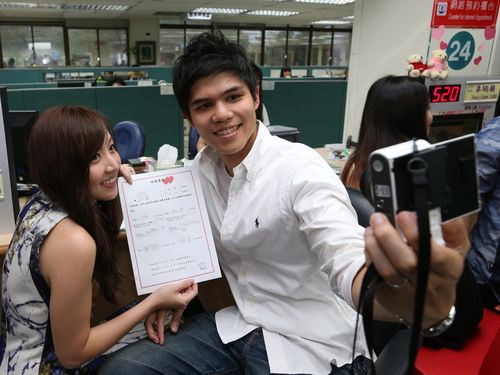 Taipei, May 20 (CNA) Almost 5,000 couples around Taiwan tied the knot Tuesday, hoping to reap the benefits of getting hitched on such an auspicious day --May 20 sounds roughly like "I love you" in Chinese -- official data shows.
According to tallies compiled by the Interior Ministry, as of 5 p.m., 4,810 marriages had been recorded, with the highest number of 951 in New Taipei. Ministry officials said the actual figure could be higher, taking into account the fact that data from some household registration offices that remain open after most others close in the evening would not have been reported, noting that 5,030 couples walked down the aisle on the same day last year.
There may be an additional layer of blessings this year as the year 2014 sounds roughly like "foreover love" in Chinese.
The southern city of Kaohsiung reported 10 times the number of people who get married on any given day, with a total of 632 couples becoming husband and wife. There has been a trend among lovebirds in Taiwan in recent years to get married on auspicious-sounding dates or dates thought to carry significance.
Some 7,050 couples tied the knot on the first day of 2011, the 100th founding anniversary of the Republic of China, the highest in a single day for many years. Meanwhile, 6,774 couples got married Sept. 9, 2010 -- the 99th year since the founding of the ROC -- in light of the streak of "nines" that some associate with a Chinese proverb meaning everlasting love.
Other examples included 5,634 newly registered couples Oct. 10, 2011, as "double 10" suggests perfection in Chinese culture. (By Hsieh Chia-chen and Scully Hsiao)