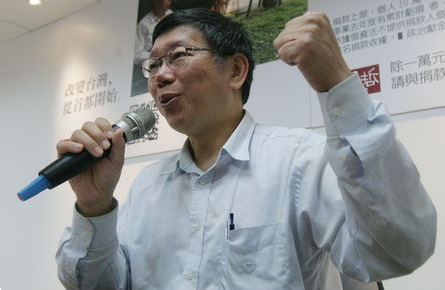 TAIPEI (Taiwan News) – Independent candidate Ko Wen-je was cranking up his campaign for the Taipei City mayoralty with new recruitment and advertisement drives, reports said Tuesday.
The outspoken physician first faces an opinion-poll race against Democratic Progressive Party lawmaker Yao Wen-chih, who defeated two fellow party members to win the first phase of the selection process for opposition candidate in the November 29 election. The second phase includes a poll between Ko and Yao to see who is the strongest candidate to face ruling Kuomintang nominee Sean Lien.
Ko said Tuesday that more than 100 people had volunteered for openings on his campaign team which he announced on May 16. The volunteers could find work in his departments for news, publicity, Internet, policies, activities and civil affairs.
While there was no age limit, young people were welcome, Ko said, adding that those without working experience could join in to be led at first with campaigners with more experience. The move would allow younger people to break through if they showed enough enthusiasm and idealism, he said.
He denied actively recruiting participants in the Sunflower Movement which occupied the Legislative Yuan from March 18 to April 10 to protest against the services trade pact with China. If members of that movement came to register, they would be welcome, but he was not seeking them out specifically, Ko said.
Candidates for the jobs on the Ko campaign were asked to show up for interviews on May 24, while those hoping to work as spokesperson would have to prepare a three-minute speech, reports said.
The physician would apparently start recording his first TV campaign ads on Wednesday, reports said. The ads would cover about 30 issues and would be gradually broadcast over the next weeks.
Ko said that his biggest asset was his neutrality. As a member of no political party, he would not be tied down by factions and could seek the support of all parties, he said. His refusal to join the DPP in order to seek the opposition nomination provoked verbal attacks from senior members of that party, including former Vice President Annette Lu. She withdrew from the first stage of the selection process just days before Yao defeated attorney Wellington Koo and lawmaker Hsu Tain-tsair.
On the KMT side of the campaign, media personality Clara Chou reached an agreement with Lien to drop a case against her. She had accused the KMT candidate of having traveled to China in support of the Top Pot bakery chain, which was accused of making false claims to sell its products.
Lien denied the allegation, though he had said he had taken the stage with Top Pot investors in Taiwan. In return for dropping her accusations about Lien in China, the politician agreed to abandon demands for compensation, reports said Tuesday.