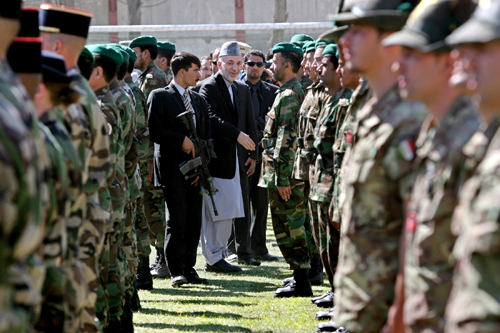 NATO took control of all security concerns across the whole of insurgency-hit Afghanistan yesterday when it took command in the east of the country from a U.S.-led coalition force.
NATO's International Security Assistance Force already commanded forces in the north, west and south, as well as in the capital, Kabul. Yesterday it took command of about 12,000 U.S. troops in the east as well.
Violence has surged in Afghanistan this year to its most intense since U.S.-led forces ousted the hardline Taliban five years ago, weeks after the September 11 attacks.
"This is a momentous day that again signifies the absolutely unshakable commitment of NATO to Afghanistan, both militarily and politically," the top NATO civilian official in Afghanistan, Daan Everts, told a news conference.
The Afghan mission is the alliance's biggest ground operation in its history. The transfer of U.S. troops is the biggest deployment of U.S. forces under foreign command since World War Two.
The U.S. troop transfer had been expected later in the year, but alliance officials said battles with resurgent guerrillas in the south showed the urgent need to pool British, Dutch and Canadian troops under NATO with the U.S. forces.
With the inclusion of the U.S. troops in the east, the NATO force in Afghanistan will number about 31,000 troops.
Afghanistan President Hamid Karzai attended a change-of command ceremony at NATO's Kabul headquarters. He thanked his allies for their help in battling terrorism.
Nearly five years to the day since the beginning of the U.S.-led offensive to oust the Taliban, Afghan, U.S. and NATO troops stood to attention as a U.S. coalition flag was lowered and a NATO force flag raised to signify the transfer of command.
The commander of NATO's Afghan force, General David Richards, said the unity of command the transfer brought would enhance the effectiveness of the overall operation.
"There will be no loss of capability. Indeed, by bringing the residual U.S operation into the NATO one, it clearly strengthens the NATO one considerably," Richards told the news conference.
Referring to fighting in the south since NATO took command there in July, Richards said the NATO force had shown its resolve to meet the challenges of its expanded mission.
"NATO/ISAF and the ANA have, since we took over responsibility for the south, unequivocally proved our mettle," he said, referring to the Afghan National Army.