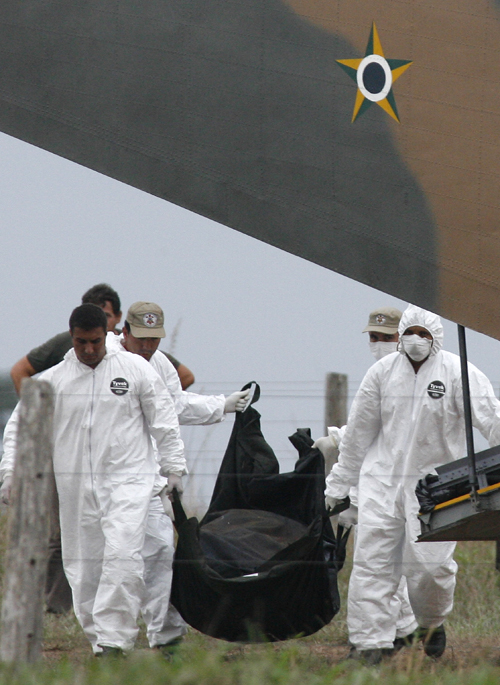 Prosecutors could charge two American pilots of an executive jet with manslaughter for a high-altitude collision with a Boeing 737 that apparently led to 155 deaths, federal police said Wednesday.
Police seized the passports of pilots Joseph Lepore and Jan Paladino, both from New York State. The two were not arrested, but cannot leave the country.
Lepore and Paladino were piloting the Brazilian-made Embraer Legacy 600 when it collided with a brand-new Boeing 737-800 above the Amazon rain forest near Peixoto de Azevedo in Mato Grosso state, some 1,770 kilometers northwest of Rio de Janeiro.
Gol airlines Flight 1907 crashed, killing all 155 aboard. The Legacy was damaged, but landed safely at an air force base.
Mato Grosso's acting federal police director, Geraldo Pereira, said the Federal Prosecutor's Office had ordered an investigation into "the possible commission of a crime."
"We will start investigating if the two pilots caused the accident and if they are considered guilty they could be charged with involuntary manslaughter," Pereira said.
Lepore and Paladino underwent questioning and routine physical tests in Rio de Janeiro on Tuesday and did not talk to journalists.
More questions ahead
Mato Grosso state prosecutor Adriano Roberto Alves wants to question the two, as well as air controllers and other passengers of the Legacy, his press office said Wednesday.
It said Alves will depend on police investigations to decide whether criminal charges will be filed.
The air force said both jets were equipped with a modern traffic collision avoidance system, which monitors other planes and sets off an alarm if they get too close.
But Pereira said that the Legacy's transponder, which automatically transmits electronic signals that communicate a plane's location, may not have been operating.
"Preliminary investigations indicate that the pilots may have turned off the transponder, that they knew the risks they were running and nevertheless they took certain attitudes that endangered the lives of people," he said.
Judge Tiago Souza Nogueira de Abreu, who ordered the investigation, told the government news service Agencia Brasil that "the hypothesis of a failure by the crew is not discarded."
Officials have told local news media that air traffic controllers had ordered the jetliner to maintain an altitude of 11,300 meters while the Legacy was supposed to be at 11,000 meters.
"There were no orders to change flight plans," Brazil's Defense Minister Waldir Pires said. "They should've maintained their original altitudes."
The Legacy was making its inaugural flight from the southern Brazilian city of Sao Jose dos Campos to the United States, where it had been purchased by ExcelAire Service Inc., based in Long Island, New York.