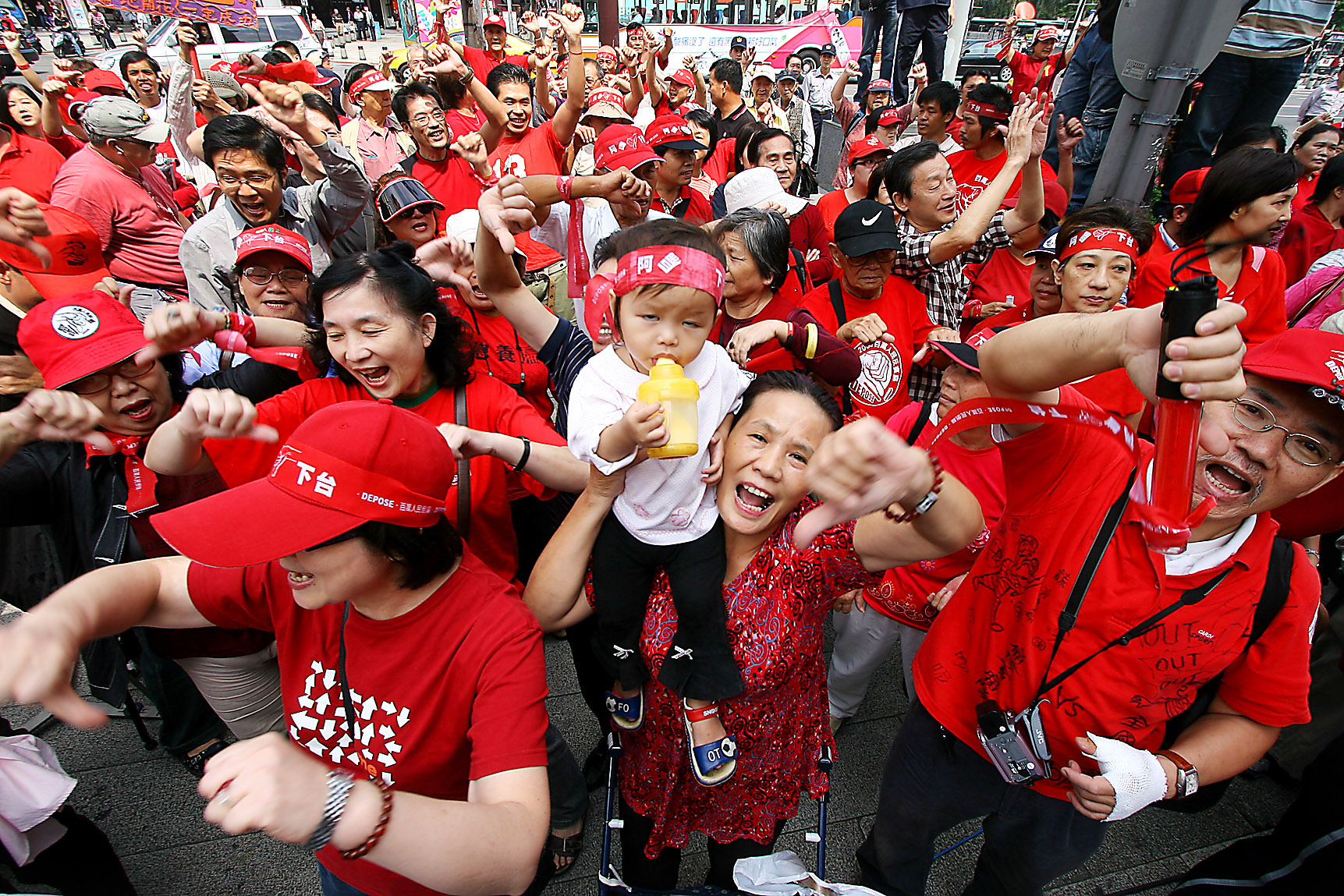 Opponents of President Chen Shui-bian (陳水扁) yesterday engaged in a nationwide "flash demonstration" outside subway stations or train stations to urge the president to step down.
In downtown Taipei, anti-Chen protesters gathered at around 11:45 p.m. at the number 1 exits of each Mass Rapid Transit station to shout anti-president slogans for about 10 to 15 minutes and give thumbs down signs to show their desire for the president to step down.
The flash demonstration was launched by the "Million Voices Against Corruption" campaign aimed at deposing the president over a spate of corrupt allegations against his family members and close aides.
Even though protesters held the demonstration without applying for permission in advance, the demonstrators dispersed peacefully before the police had a chance to intervene.
At the Ximending MRT station, the anti-graft campaign's deputy leader, former independent legislator Su Ying-kuei led about one hundred of Chen opponents to protest briefly and shout, "A-Bian (the president's nickname) step down!"
Chien Hsi-chieh (簡鍚?), the campaign's other deputy, sounded the horn of his white vehicle in time to the "A-Bian step down" chat.
Su said that the purpose of the flash demonstration was to allow people to learn how to conduct themselves when participating in demonstrations so they could do it on their own.
The police experienced a moment of panic when about 50 to 60 demonstrators made moves to go towards the Presidential Office following the flash demonstration. However, they were persuaded to move to in front of the Taipei Train Station where the anti-Chen campaign which kicked off September 9 is allowed to hold rallies.
In front of the Kaohsiung City government building, about 10 protesters led by a People First Party Kaohsiung City councilor gathered and shouted, "Taiwan stand up, A-Bian collapse!"
One man surnamed Cheng wearing red stood alone and gave the thumbs down gesture in the square in front of the Kaohsiung County government hall.
In central Taiwan, around 10 people mimicked the flash demonstration in Taipei at the Taichung train station, shouting, "Shameless Bian step down!" One protester, surnamed Wu, who joined the anti-Chen demonstration along with her three-year-old son, said that she was protesting against the president for the sake of her child, who represents the future generation, because the corrupt regime and incompetent government led by Chen is harming Taiwan's economy.
In front of the Yilan train station in northeastern Taiwan, several drivers sounded their vehicle horns in a show of support for the flash demonstration.
Meanwhile, the anti-corruption procession led by Shih Ming-the yesterday proceeded to Yilan County - hometown of Democratic Progressive Party Chairman Yu Shyi-kun (游錫?) - and passed through Junghe's riverside park in Taipei County where Shih gave an anti-Chen speech before returning to Taipei Train Station.
Around 1,000 people participated in the anti-Chen assembly held in Yilan while some DPP supporters led a funeral procession and played funeral music to counter the anti-Chen assembly.
One man surnamed Liu, who threw eggs at one of the procession's buses, was arrested and the police is investigating why he was also carrying stones and an iron rod.
Shih called on people to provide megaphones or speakers and vehicles for the headquarters of the anti-Chen campaign to support the campaign's plan to besiege the Presidential Office on National Day.
Shih had originally planned to suspend the rest of the procession so that he could meet with his comrades in order to prepare for the siege on October 10. He changed his mind about canceling and pledged to complete his tour to rally support for the campaign's siege plan.