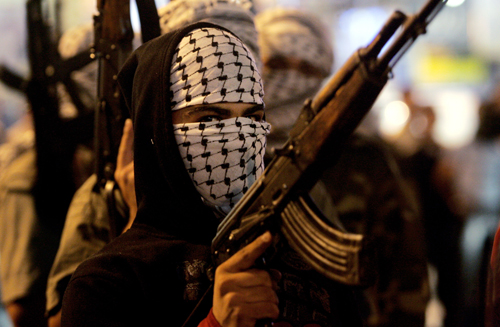 Providing more humanitarian relief and freer movement across borders are ways the U.S. may be able to help improve the lives of Palestinians, U.S. Secretary of State Condoleezza Rice said after meeting with Palestinian President Mahmoud Abbas.
The top U.S. diplomat said Wednesday that she hopes to revitalize and expand agreements made last year to help people and goods move with fewer restrictions across the borders with Israel and Egypt. Although she said she would like to increase resources for humanitarian relief, Rice made no specific pledge of U.S. aid.
"Those are the kinds of on-the-ground things that make it easier for the Palestinian people," Rice said.
A senior U.S. State Department official, speaking on condition of anonymity because Rice's discussion with Abbas was private, said the United States supports an expansion of Abbas' security force, the presidential guard, as part of a multimillion-dollar plan to strengthen and streamline overlapping Palestinian security forces.
Abbas is trying to resolve a nine-month political stalemate with Hamas radicals who control part of the Palestinian government. At the same time, the United States has been trying to prompt Arab countries to increase their financial support for the Palestinians.
Rice is in the Middle East this week to drum up Arab support for the moderate Abbas and to test ways that the United States and other powers might help from afar. The United States hopes that Abbas will benefit from any ease in the rising tension and hardship in the territories, but the United States is also worried that the situation could spin out of control.
Underscoring the gulf remaining with the militant group Hamas, which controls the Palestinian Authority, Palestinian Prime Minister Ismail Haniyeh accused the U.S. of trying to "rearrange" the Middle East for its own purposes.
Rice "cares only to rearrange this region and to rearrange the Palestinian scene in a way that serves the American and Israeli agenda," Haniyeh, a Hamas member, said in Gaza City.
Rice is putting gentle pressure on Israel to loosen what Palestinians claim is a blockade of their separate territories in the West Bank and Gaza Strip. The territories are not economically viable without extensive trade across their borders with Israel and Egypt and without the daily passage of Palestinians to jobs elsewhere.
"We are very concerned, of course, about the humanitarian conditions in the Palestinian territories, about the economic situation," Rice said.
"We understand that some of the economic hardships are of course caused by the lack of mobility, the lack of movement and access, and I will of course see what I can do to make sure that some of those crossings are indeed open longer and more frequently so that economic activity can return," she said.