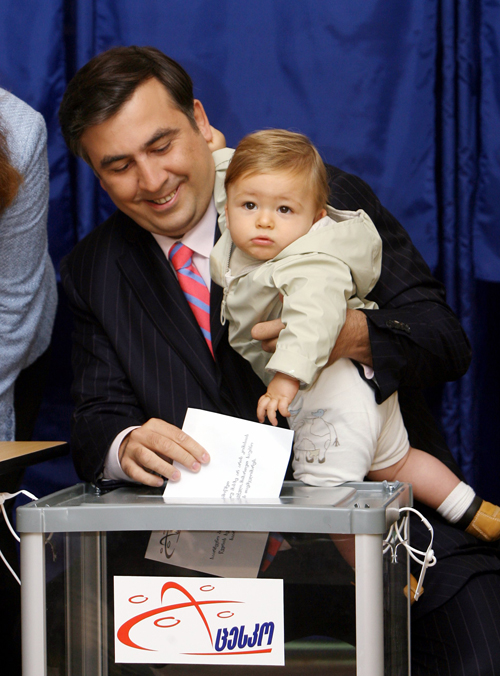 Voters cast ballots yesterday in municipal elections seen as a crucial test for Georgia President Mikhail Saakashvili during a crisis in relations with Moscow that has led to a suspension of transport and postal ties that could severely harm Georgia's economy.
"We are hearing a lot of cursing and criticism about Georgia these days from certain people, but on the other hand we have a lot of support in the world," Saakashvili said after voting with his 9-month-old son Nikoloz in his arms.
"Those who speak badly of us prove they don't know what to do, but they cannot stop Georgia's progress toward independence and a bright future," he said.
The country's 3.2 million registered voters are to choose the more than 1,700 members of municipal and regional councils that will in turn elect mayors and regional administration heads. The highest regional posts, regional envoys, are appointed by the president, and the current elected local government bodies are dominated by Saakashvili's party.
The closest-fought race is in the capital Tbilisi, the city's mayor is the second most prominent political official. Shalva Natelashvili, head of the left opposition Labor party, hopes to unseat Saakashvili ally Gigi Ugulava, running for the United National Movement.
The Labor Party and the Conservative Party are both counting on voters to react to the sharp increase in the cost of living following the 2003 Rose Revolution. Meat prices have doubled, the prices for grains and sugar have risen by about 20 percent, and electricity and gas costs have likewise risen - a factor in the slide in Saakashvili's popularity, according to polls.
The Organization for Security and Cooperation in Europe, which has election observers in Georgia, said that alongside the incumbent mayor's campaign, state and city officials had set some highly visible welfare projects in operation in Tbilisi.
"These activities may blur the distinction between the legitimate campaign activities and the use of administrative resources for election purposes," the group said in an interim report on the campaign.
The single pro-Russian party, other than the Communists, were not running in yesterday's elections. Twelve leaders of the Justice Party and its allies were arrested last month and face charges of high treason for allegedly plotting a coup against Saakashvili.
Russia's chilly relations with Georgia have worsened steadily since Saakashvili came to power following the 2003 Rose Revolution, vowing to take the country out of Russia's orbit, rein in the breakaway provinces of Abkhazia and South Ossetia and join NATO in 2008. Georgia accuses Russia of backing the separatists, which Russia denies.
In a televised message to voters broadcast late Wednesday, Saakashvili said his government's commitment to joining NATO was unwavering, and would provide "additional guarantees of security."
Yesterday's local municipal elections "are the largest exam that should be passed by you, as citizens and as a nation, after the most recent events," he said.
After Georgia's arrest last week of four Russian officers on spying charges, Russia slapped on a suspension of air, sea, road, rail and postal links Tuesday. The arrests appear to have been the last straw for the Russian leadership, which is clearly alarmed over Tbilisi's goal of NATO membership and the growing U.S. influence in its former Soviet backyard.
Saakashvili's popularity has plunged halfway through his five-year term and he has been accused of rolling back democratic freedoms.
Goderdzi Kimeridze, a 30-year-old office worker who cast his ballot in Tbilisi on yesterday, said he agreed with Saakashvili's foreign policy course but that he had voted for the Conservatives.
"They are also for joining NATO, they're pro-Western. But they're calmer and they don't make such harsh statements," he said. "Politicians should be more diplomatic."