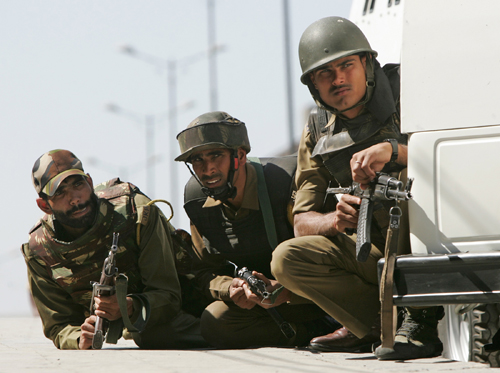 A fierce gunbattle killed a policeman and two suspected Islamic militant gunmen yesterday, a day after four officers died trying to storm a hotel in Indian Kashmir's main city where the gunmen had holed up in a 21-hour standoff with security forces.
Troops were checking for more gunmen in the hotel in downtown Srinagar's Lal Chowk area, said Deputy Inspector-General of Police Farooq Ahmed.
"We are in the final mopping-up operation. We hope to be finished soon," Ahmed said. "They (the suspects) tried to jump out and get away, but we shot them down."
The standoff began at noon Wednesday, when gunmen at the hotel opened fire at a building on a nearby paramilitary base, Ahmed said.
Police besieged the hotel and tried to storm it after several hours, but were unable to dislodge the gunmen.
Three officers were killed in the initial assault and another died later, said Sanjiv Sharma, head of one of the security forces operating at the scene.
Thirteen other people, including several civilians, were reported wounded in the fray.
At nightfall Wednesday, police called off their attempted assault and took up positions around the hotel, Ahmed said.
Throughout the siege the gunmen and forces exchanged gunfire and lobbed grenades at each other, forcing shops and business in the central market area to shut down.
Ahmed said his forces were hampered in their attempt to get the suspects because they were restricted to using light arms, fearing that heavier weapons could set the hotel on fire.
The local Current News Service quoted an unidentified man, claiming to be a spokesman for the Kashmiri militant group Al-Mansorian, as saying three of its men had carried out the hotel takeover.
Anti-India sentiment runs high in Kashmir, India's only Muslim-majority state, where most people favor independence from Hindu-majority India or a merger with mostly Muslim Pakistan.
Kashmir is split between India and Pakistan, but both countries claim the Himalayan territory in its entirety.
More than a dozen Islamic rebel groups have been fighting security forces in the Indian-controlled portion of Kashmir since 1989. At least 68,000 people, most of them civilians, have died in the conflict.