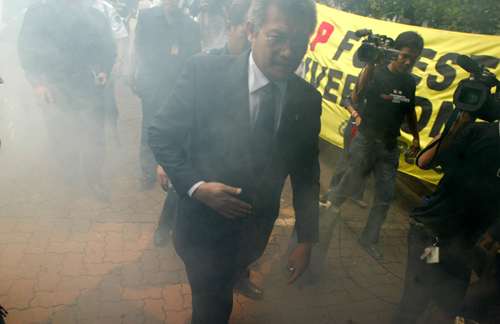 Indonesia hopes that coming monsoon rains will soon extinguish land-clearing fires that are shrouding large parts of the country and neighboring Malaysia and Singapore with a choking haze, a minister said.
Environmental activists, meanwhile, billowed artificial smoke outside the forestry ministry yesterday to pressure the government to stop the blazes, which occur every dry season in Indonesia and to a lesser extent Malaysia.
The fires are started by farmers or agricultural companies looking for a cheap way to clear brush land for plantations, often palm oil. They are currently raging in Kalimantan province, the Indonesian part of Borneo, and on Sumatra island.
"I am optimistic this will soon be over," Transport Minister Hatta Radjasa said late Wednesday. "In around one week it will stop because the rainy season will arrive."
This year's blazes are some of the worst since 1998, when the dry season was especially long due to the el Nino effect. Then, smoke spread as far as southern Thailand and caused some US$9 billion in damages to tourist, transport and farming industries.
Members of the environmental group Greenpeace pumped out smoke from portable machines as the forestry minister arrived at work. They hung up a large banner calling on the government to stop granting licenses to convert forests to plantation lands.
"Any new concessions for conversion of virgin forests will result in large-scale forest fires and continued environmental destruction on an annual basis," said Greenpeace activist Hapsoro, who goes by a single name.
Minister Malam Kaban said that not giving out new licenses was already government policy and said that the fires were not chiefly occurring in forest areas, but in peat bogs that are difficult to extinguish.
A large swath of Indonesia is affected by the smog, forcing residents to wear masks and switch on vehicle lights in the daytime, delaying flights and sending air quality to dangerous levels in many towns and villages.
The haze is getting worse in Malaysia, with officials saying yesterday that only five of 51 monitoring stations across the country were reporting clean air. Of the 15 stations with unhealthy levels of air pollution, eight were on Sarawak, Malaysia's largest state on Borneo island.