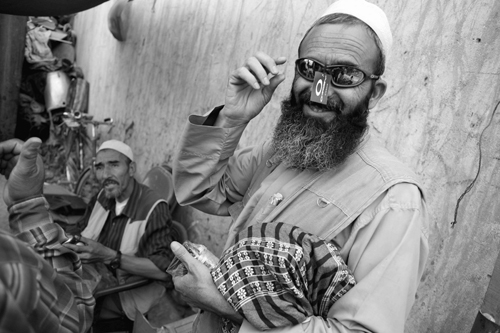 The Pace Picante sauce expired two years ago, and the spider-web witch hat has seen better days. None of the Afghans here is quite sure how to use the Hot Body Tanning Oil, the Magic Smooth Razorless Hair-Removing Cream for Black Men, or the Shimmer Me Sexy lotion. Or why.
But such details do not really matter here at the Bush Bazaar, named after the U.S. president, where the cheap American goods fly off the shelves, regardless of their use. A can of almost seven pounds of sweet corn sells for US$.80; a bottle of Texas Pete hot sauce runs a dollar.
"What's this?" asked customer Mujib Rahman, 29, holding up Dial for Men, which promises the ultimate clean. "Is it good for my hair? Because I'm about to be bald."
He is told he should not fight baldness, and that sadly, no magic American product will cure it.
Outside the door, a teenager buys a U.S. military ready-to-eat meal for 30 cents. The shopkeeper bags it before realizing that the meal is Menu No. 2 - pork rib - which violates Islamic dietary rules.
"This is pork," said the shopkeeper, handing the 12th grader Menu No. 10, chili and macaroni. "Don't eat it. Never eat Menu No. 2."
There is no Bush Bazaar sign, and no advertising. This is the black market, where all the goods were bought from someone who knows someone who has a connection. Once, these shops were called the Seven Colorful Stars market, but back then, people used the empty stalls mainly as a place to go to the bathroom. A group of friends and relatives decided to clean up the shops about a year ago and sell American goods. Customers renamed the market for Bush, and business has been growing steadily since.
"Bush is a good man," said shopkeeper Jawad Mojtaba, 22. "People buy cheap things in his bazaar in Afghanistan."
It seems an obvious name for this literal country. During the Soviet occupation of the 1980s, a black market filled with Soviet goods was called the Brezhnev Bazaar, after Leonid Brezhnev, the Soviet leader who ordered the invasion of Afghanistan.
The Bush Bazaar, in a crowded downtown market about three blocks from the presidential palace, does not look like much. It is a dingy, two-aisle stretch of tiny stores with corrugated metal roofs and dusty concrete floors. The nicer shops have white shelves and fluorescent bulbs. Ripped tarps draped over the aisles protect shoppers from the sun and rain, and boxes of American goods - whether a DVD of Cheech & Chong's "Up In Smoke" or U.S. military ready-to-eat meals - spill out of shop doorways.
"People usually say, 'Let's go to the Bush Bazaar and buy American products,'" said shopkeeper Ghulam Rassul, 59, a one-time army colonel.
His shelves are lined with industrial-sized tubs of protein powder, Aunt Jemima maple syrup, Oreos, green beans and beef ravioli. A 64-year-old man with a fondness for dairy products holds up a Hunt's Snack Pack of vanilla pudding and asks if it violates Islamic dietary rules. Rassul tells him it does not.
Most customers are Afghan, but some foreigners have figured out that foreign goods are cheap here. Occasionally, U.S. soldiers show up, buying up any computer hard drives - even the damaged ones - and flash drives. Shopkeepers save all computer parts for the Americans, who pay well, ever since the Los Angeles Times reported last spring that a black market of U.S. goods near the Bagram military base sold computer storage devices containing military secrets.
The U.S. military says food and military supplies are sometimes stolen while being shipped to bases in Afghanistan. Afghan workers on bases are regularly searched, said Lieutenant Marcelo Calero, a spokesman for the U.S.-led coalition. Investigators occasionally visit such black markets to look for contraband but have no jurisdiction over them, he said.
No incriminating computer storage drives could be bought at this market on a recent visit. But Bushnell binoculars could be bargained down to US$20, and other military-type equipment could be found for cheap prices.
The market is a constant culture clash, but a nice culture clash, because most Afghans cannot read English and are endlessly accepting of the odd ways of foreigners, as long as they do not consciously violate Islam.
Rassul's shop sells something called Yilishabai Breast-Beautifying Treasure - a cream for a woman's breasts that is of questionable non-American origins. Another shop sells small fake Christmas trees, along with an ornament proclaiming "girl power." Shopkeepers seemed particularly confused by the myriad ointments, creams and oils that Americans use.
"We don't know what these things are for," said shopkeeper Anayatullah Mahmud, 45. "But anybody who can read and knows what they're for can buy them."