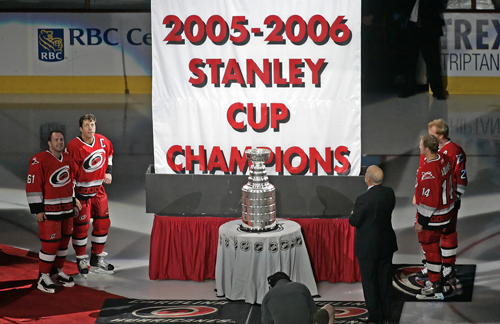 The Carolina Hurricanes raised their National Hockey League championship banner here Wednesday, but the Buffalo Sabres cut short their celebrations.
The Sabres edged the Stanley Cup champion Hurricanes 3-2 in a shoot-out as the puck dropped on the 2006-07 NHL campaign.
Daniel Briere scored the only goal of the shoot-out as Buffalo earned a measure of revenge against the team that ousted them in seven games in the Eastern Conference finals last season.
Chris Drury and Jason Pominville scored in regulation and Ryan Miller stopped 32 shots as well as all three attempts in the shootout for the Sabres.
Erik Cole and Eric Staal scored goals and Ray Whitney added two assists for the Hurricanes. Conn Smythe winner Cam Ward made 30 saves and also had an assist in the game.
Carolina misses chance
Carolina had the first chance in the shootout, but Ray Whitney missed the net. Briere followed with his backhander over Ward.
Staal took the next shot, but Miller stopped him and finally sealed they win by blocking Cole's effort.
The game was preceded by festivities celebrating the Hurricanes' 2005-06 Stanley Cup triumph.
But the squad for the current campaign is missing some of last season's key figures, including Mark Recchi, Martin Gerber, Matt Cullen, Josef Vasicek, Aaron Ward and Doug Weight, all of whom signed with other teams in the offseason.
"We're not really thinking about guys who are not here," Cole insisted. "We've got guys in the room that are capable of scoring or contributing."
Energized by the raucous pre-game celebrations, the Hurricanes launched a flurry of early shots.
But the Sabres scored the first goal of the new season at 9:09 of the first when Pominville redirected Dmitri Kalinin's shot from the blue line.
The Hurricanes knotted the score at 14:42 of the first, when Staal snapped a shot over Miller's stick.
Staal scores
"It's always good to get the first one out of the way," Staal said. "I was bound to get one in the net if I had six shots in the period. I'll just continue to attack the net. I'll take them any way they come."
Cole put Carolina ahead 2-1 with his first regular-season goal, a power-play strike at 12:41 of the second period. Drury made it 2-2 less than three minutes later.
Other NHL action
The Ottawa Senators earned a 4-1 victory over the Maple Leafs in Toronto. Ex-Hurricane Gerber was superb in goal for the Senators, who had goals from Patrick Eaves, Chris Neil, Christoph Schubert and Daniel Alfredsson.
In Colorado, Darryl Sydor's goal at 2:07 of overtime lifted the Dallas Stars to a 3-2 victory over the Avalanche.
Mike Modano and Loui Eriksson both scored in the third period for the Stars to force overtime, after Joe Sakic and Wojtek Wolski put the Avs ahead 2-0 in the opening period.