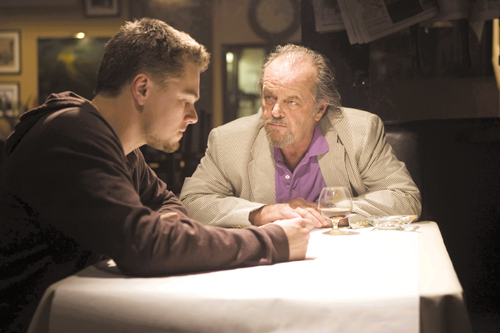 The Departed
神鬼無間
Directed by: Martin Scorsese
Starring: Leonardo DiCaprio, Matt Damon, Jack Nicholson, Mark Wahlberg
Reviewed by: Colin Covert, McClatchy Newspapers
Opens: Yesterday, October 5
Grainy video footage of a 1970s Boston race riot opens "The Departed," and that is really the only black-and-white conflict in the story. Everything else in Martin Scorsese's wildly entertaining espionage story happens in the gray areas that exist between loyalty and self-preservation, truth and deception.
In this story of spies planted by the Irish mafia and the State Police in each other's operations, no one can be certain who's trustworthy and who's a traitor in disguise. Even the cops are trying to do the right thing in a time and place where right and wrong are negotiable concepts. It's a great premise for this spellbinder, and a twisted reflection of America's post-9-11 paranoia. It's not a mere crime thriller, even though it's dense with violence and suspense.
The story is set in present-day Boston, amid an Irish family culture that hasn't evolved much since the warlike clans of Scorsese's "Gangs of New York." The city is divided into two feudal camps eager to expand their territory. The sociopathic Frank Costello (Jack Nicholson) rules the crime world with an iron - and very bloody - fist. He has infiltrated the police force by sending his surrogate son, Colin Sullivan (Matt Damon), through the academy. Captain Queenan (Martin Sheen) is honorable man whose position requires him to navigate moral waters murkier than the Charles River. He has placed recently graduated William Costigan (Leonardo DiCaprio) in Costello's organization, absolving him for whatever crimes he may need to commit to maintain his cover.
As their plans collide, each party struggles to remain hidden and salvage what he can, yet none of the players will escape unscathed. An early cop school lecture on the physics of a hollow point 9mm slug entering a skull isn't just incidental detail, it's foreshadowing.
Scorsese has made numerous Mafia stories in his career, continually surprising us with how original each movie is. "The Departed" is a knotty and complex story like "Casino" and "Goodfellas," but it's remarkably energetic and fresh, densely peopled with vivid multidimensional characters. There are no forgettable, walk-on roles in Scorsese's film, and the inspired cast makes even minor henchmen into colorful and distinctive individuals. Nicholson dominates as Frank, spitting lines like acid or caressing them with a honeyed purr. And what endlessly quotable lines William Monaghan's script gives him, eruptions of macho malevolence so sulphrous they seem like the exhalations of a pagan god.
Damon and DiCaprio are in career-best form as the rival moles. Damon undermines his all-American charm as the smooth, wide-smiling office backstabber, while DiCaprio's compromised cop is cold and bottled up. You can feel the strain each has in keeping his mask in place. As the police psychologist who sees both of them, Vera Farmiga creates a fully formed character, a shrink who is nakedly vulnerable to her clients' mind games.
"The Departed" demands a big investment of attention. It's an intricate story, episodic at the outset. But if the story suffers at the outset from a slight lack of focus, hang in there, because you will soon become immersed in a mesmerizing, expertly plotted cat-and-mouse game.
Scorsese's vision, original, haunting and straight from the heart, places him atop that pinnacle of stylists who enrich the modern crime movie.