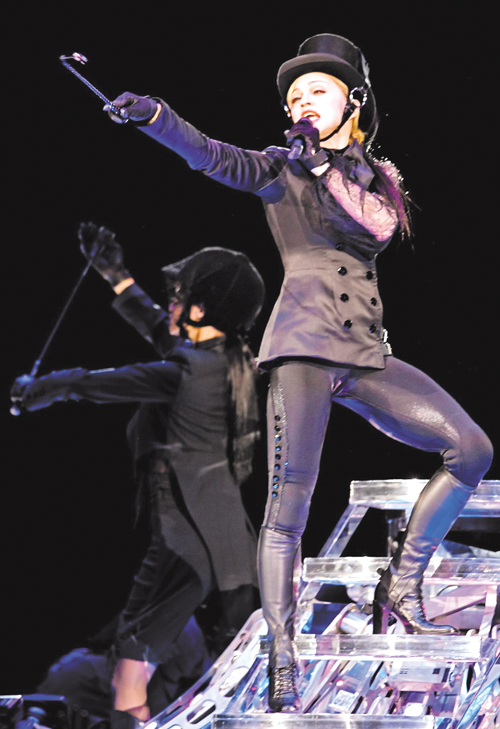 A spokeswoman for Madonna on Wednesday denied claims by officials in the African nation of Malawi that the pop star had adopted a one-year-old orphan boy there.
Spokeswoman Liz Rosenberg called the report "completely inaccurate" but said Madonna was not bothered by it because it would draw attention to the problems of children in the impoverished African nation.
Rosenberg, said Madonna was visiting orphanages in Malawi this week as part of a charitable program to provide care for an estimated 1 million children who are without parents in the southern African nation, many of them suffering from AIDS.
"She has has not adopted a child," Rosenberg told Reuters. "She went on a private visit to Malawi ... to participate in the building of an orphanage and several other initiatives that are all under the auspices of an organization called Raising Malawi."
Rosenberg said there was no truth to statements from the Malawian government that Madonna had chosen to adopt a year-old boy from among 12 children specially selected prior to her arrival in the capital city of Lilongwe on Wednesday.
"She asked us to identify boys only, which we have done after visiting four orphanages in Lilongwe," government spokeswoman Adrina Michiela said, adding that Madonna had wanted to adopt a girl but changed her mind two weeks ago.
"None of that is accurate," said Rosenberg, who acts as Madonna's chief spokeswoman at her Warner Records music label.
Malawian officials were not immediately available for comment on the denial by Madonna.
Asked whether the 48-year-old star, already a mother of two children with her husband, British filmmaker Guy Ritchie, was making adoption plans or contemplating adopting a child in the future, Rosenberg said, "I have no idea."
Rosenberg said she had spoken to Madonna directly since the adoption story broke and that the singer was not angry about the situation.
"I think that anything that brings attention to the country is fine with her, even if it's information that's not correct," the publicist said. "She wants people to pay attention to Malawi and to the 1 million children who don't have parents and don't have care there."
Madonna's trip has stoked high expectations in Malawi, a nation of 13 million people who are dependent on tobacco exports. According to the Raising Malawi Web site (www.raisingmalawi.org), at least 1 million children are oprhans in Malawi and about 30 percent of them have AIDS.
Madonna has said she plans to spend at least US$3 million on programs to support orphans in Malawi and another US$1 million to fund a documentary about the plight of children in the country.
She traveled to Mphandula, a village 20 kilometers outside Lilongwe, where she is funding the construction of the Raising Malawi center to feed and educate about 1,000 orphans.