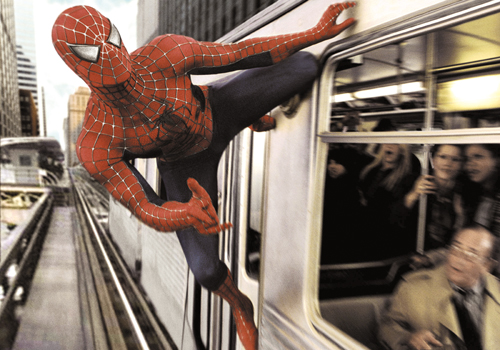 Perched atop a crane on the Warner Bros. set of Eddie Murphy's latest comedy, stuntwoman Sandra Gimpel takes a deep breath, leans backward and hurls herself 3.7 meters into a bed of plastic flowers. Landing with a thud, she gets up and does it again.
At age 67, Gimpel is a rarity in a field dominated by men. Over a career spanning 39 years that began on the old "Lost in Space" television show, she has performed stunts for actresses including Debbie Reynolds, Drew Barrymore and Sally Field. In all those years of being set on fire and jumping out of buildings, she's only broken two ribs.
Now, she and her colleagues in the California-based stunt business face a bigger threat than broken bones: computers. The digital effects that allow filmmakers to manufacture daring feats that humans can't perform may start seeping into the ones they can.
"There are a lot of guys who would say it's all over as the technology gets better and better and the cost comes down," said Steve Kelso, president of the Stuntmen's Association of Motion Pictures, a trade group based in Toluca Lake, California, that help members find jobs. "There's also a percentage of people who are thinking that the public might not want a synthetic movie."
About 10,000 people are registered as stunt performers with the Screen Actors Guild, according to spokesman Seth Oster. Only about 1,500 of them regularly perform dangerous stunts, said Kelso.
Neither organization tracks whether jobs have been lost to computers. Yet some in the business cite anecdotal evidence.
Explosive leaps
Stunt performers recently lost work to digital effects on the upcoming "Evan Almighty," a sequel to Universal Pictures' hit 2003 film "Bruce Almighty," said stunt coordinator Mickey Gilbert.
The script calls for an explosion that blasts actors through the windows of a house.
Previously, stuntmen would have jumped out the windows at the moment of a real explosion. With digital effects, Gilbert only had to blow up the house. Actors, filmed separately leaping over a camera, were digitally inserted into the scene.
The trend is also reflected in such effects as crowd scenes for horror and war movies, where a handful of live human beings can be digitally multiplied.
Digital effects aren't necessarily cheaper, said Tim Sarnoff, president of Sony Pictures Imageworks Inc., which created scenes for the first two "Spider-Man" movies. They enable characters to perform feats that are either too dangerous, or simply impossible, for a human.
Sony opted to use a digital Spider-Man for scenes in which the superhero swings above city streets after an experiment with a camera tracking the first-person view went awry.
The camera, attached to a New York building, veered sideways and slammed into a parked truck, Sarnoff said.
"It's impossible to have a stunt performer swing through New York like Spider-Man," Sarnoff said "No human can physically swing like Spider-Man swings."
Gilbert, 70, who jumped off a 120-foot cliff into a fast-moving river while doubling for Robert Redford in "Butch Cassidy and the Sundance Kid," hired Gimpel for her most lucrative job.
For 2001's "Rat Race," he asked her to tumble down 60 steps. Gimpel had to repeat the fall several times, forward and backward, before the director got the shot he wanted. Gilbert paid her US$7,000, she said.
Age an advantage
Typically, stunt work isn't so lucrative. Base pay is US$717 for an eight-hour day, plus some residuals from TV replays and DVD sales.
Gimpel has stayed in the picture thanks to scripts that call for older female characters. Directors prefer the real thing to younger performers who must be aged by computers and makeup, she said.
"They like you to be a little bit older because with younger women, it's hard to make them look old," said Gimpel, who stands 1.5 meters tall and weighs 49 kilograms.
On the set of the forthcoming Murphy film, "Norbit," producer John Davis pronounced Gimpel to be in "amazing" shape even while whispering, as he watched her prepare to fall: "She could break her hip."
Gimpel, who has a fourth-degree black belt in tae kwon do, recently took falls in Warner Bros.' "The Visiting," scheduled for release next year, and the CBS television show "Ghost Whisperer."
"She has a lot of natural talent, like a gymnast," said Gilbert. "She's getting a little age on her, as we all do, but she still does the job."
Gimpel started out as a dancer in films including the 1967 Elvis Presley musical "Clambake." She broke into stunt work after auditioning as a stand-in for "Lost in Space."
Other than minor bumps and bruises, Gimpel has been hurt only once. Doubling for the diminutive Helen Hunt in a 1982 television movie, "Desperate Lives," she dived out a fourth-story window and became entangled in a Venetian blind. She landed at an awkward angle, breaking two ribs.
Before she could get up, the director asked her to do it again. Gimpel said she did.
"Nobody knew I was injured, and as long as I did it right away I knew I could, because it didn't hurt yet," she said. "And guess which shot they used in the picture? The first one."