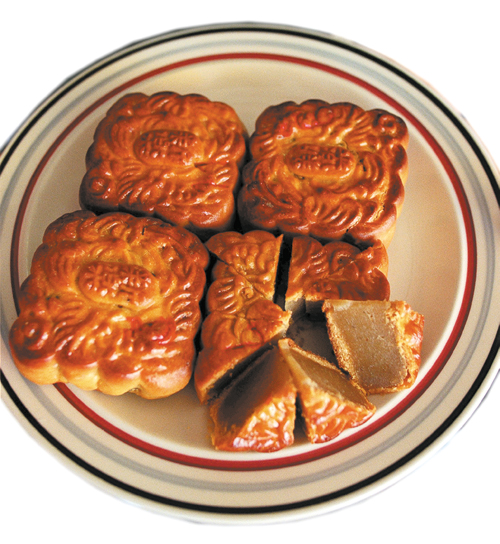 For Asia's pastry chefs, the toughest challenge each year is not about creating the perfect souffle or tiramisu, but the most exotic mooncake.
Ethnic Chinese usually give boxes of mooncakes to their families, friends and business contacts around the time of the mid-autumn festival, which this year falls on today.
The round pastries are typically made from lotus seed paste and duck egg yolks, but shops and hotels are coming up with a wider range of flavors from chocolate to champagne, and bird's nest to the smelly durian fruit.
Kelvin Yong, the head chef for Chinese pastry at Singapore's Marina Mandarin hotel, is working 16-hour days as he puts the finishing touches to his green apple truffle mooncakes, encasing the green apple puree center in white chocolate and lotus paste.
"Green apple is refreshing and most importantly, no one has done it before, that is our strong selling point," Yong told Reuters, adding this could become his signature mooncake.
"Singaporeans are now more health-conscious, they ask for food with less salt and oil. We had the health factor uppermost in mind when we thought of making our mooncakes."
The mid-autumn festival falls on the 15th day of the eighth month of the Chinese lunar calendar. The pastries symbolize the overthrow of the Mongols at the end of the Yuan dynasty in the 14th century when, according to legend, secret notes baked into sweets helped spark an uprising.
In Jakarta, fans can find mooncakes flavored with durian, jackfruit, coffee, jasmine tea, bird's nest, cheese, chocolate and even a combination of cheese and chocolate in the same mooncake. Some top hotels are offering mooncake buffets.
For those keen on a tipple, Singapore's Raffles Hotel is selling mooncakes based on its signature cocktail, the Singapore Sling, which is made from gin, cointreau and grenadine syrup among other mixers, while the diet-conscious can try mooncakes filled with low-fat, wild strawberry yoghurt.
Nutritionist's nightmare
The purists are up in arms at the blatant disregard for tradition. The only mooncake they've known is the traditional one, where the crust is baked until it is dark brown and the filling consists of lotus seed paste and salted egg yolks.
But it is also a nutritionist's nightmare. One mooncake with four salted egg yolks has 975 calories, nearly half the average daily quota, according to Singapore's Health Promotion Board.
"As it is usually high in calories due to the large amount of oil and sugar used in making them, mooncakes should be eaten in small amounts," Liong Suet Mei, a dietitian at Singapore's National University Hospital, said in an e-mail to Reuters.
Some find the heavy mooncakes too rich to stomach.
"Chinese usually buy them, Japanese do too. Local people also buy them to be given to others. But Westerners seldom like them," said Elfi Diana, a waitress at the Shang Palace restaurant of Shangri-La hotel in Jakarta.
Even in China, where mooncake vouchers are popular gifts offered by many companies to clients and staff, some people prefer cash to pastries.
In Shanghai, black market dealers, who offer services such as money-changing and ticket-peddling, are a common sight outside the pastry shops at this time of year, as some Shanghainese prefer to trade their vouchers for money.
"We received a lot of mooncakes and cake vouchers to the company, and some of us sold them on," said Wang Chong, an employee of a downtown Shanghai gym in his late twenties.
"I don't really like them anyway, the whole mooncake thing is just about tradition."