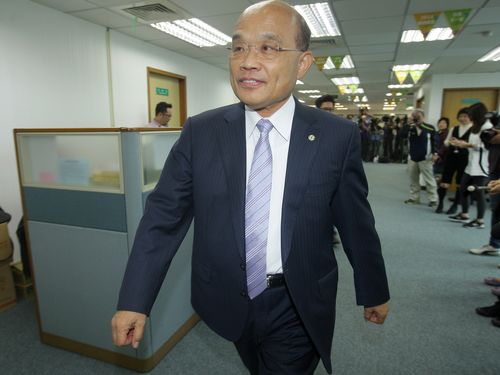 Rocked by wide-ranging and bitter criticism over its exclusion from any meaningful role in the recent student occupation of the Legislative Yuan, the DPP is feeling the ‘morning-after’ effects as it gears up for in-party election of its chairman. Monday was the first day of official registration for the race, and rather than show up to fill out his application, current Chairman shocked many inside and outside the party by posting a notice on Facebook at 8am that he would not enter the race. Three hours later former DPP chairman Frank Hsieh followed suit, announcing that for two days he has already been telling supporters in the party that in the interest of bringing about effective reform in the party he is also withdrawing from contention.

Su’s statement noted that he was one of the founding members of the DPP and naturally has very deep feelings for the party, adding that the people expect that party to uphold the values of Taiwan and defend the rights of the people, and “obviously we have not lived up to their expectations." He warned that the party’s power must not be diffused and the party’s actions cannot be random. "A new democratic tide has arrived,” he said, and “people will not wait for the DPP to act. Our only hope for the future is to be a real partner with the people. I cannot be a disruptive influence in the party, so I will let go and step back, and I will continue to work for a brighter future for Taiwan – that will never change."

Hsieh echoed Su’s remarks about harboring deep feelings for the party as one of its original founding members. He noted, however, that the DPP must take steps to rekindle trust in and enthusiasm for the party from the grass roots up. He said the party needs to move away from its factions and leave behind some of its luggage from the past, resorting to more dialogue and consultation to determine how to give power back to the people. This is a tremendous responsibility, he said, but the party hopes to build on the energy of youth and the Sunflowers student movement and move towards a brighter future.

The decision by the two party heavyweights means that former chairman Tsai Ing-wen is now a virtual shoo-in for the position in May’s election. Rather than clearing up things in the party, however, the open road to the chair for Tsai complicates the situation instead. One of the most pressing demands for those who have been agitating for reform in the party is that whoever is elected chairman should not run as the party’s candidate in the 2016 presidential election.

Meanwhile Tsai, who has previously indicated several times that she is committed to the race for party chairman, confirmed her position with the statement, "We have a firm commitment to honor the past and secure the future, to ensure a smooth transition from generation to generation, and to carry out party reform.” With that, she re-assured her supporters in the party that she will indeed stand for election.

Up until mid-March the race to determine the DPP chairman during the years leading up to the next presidential election in 2016 was largely viewed as a “pre-primary primary” to see who might be the party’s strongest candidate for president. With the outbreak of the Sunflower movement and the three-week student protest, however, everything was put on hold as legislators were completely shut out of their offices and the attention of the media and the public shifted to a couple of thousand students camped out in the Assembly Hall of the Legislative Yuan.

The movement received enjoyed tremendous sympathy as its leaders alternately offered ultimatums and proposals for resolving the conflict over the Cross-strait Service Trade Agreement (CSSTA). The ability of the student group to gum up the works of an entire branch of government cast a harsh light on the DPP’s own tactics in blocking approval of CSSTA and inspired a chorus of calls for reform in the party by members who said the leaders were indecisive, its positions were vague and it offered little hope for the future with its policies.

DPP legislator Chao Tien-lin demanded that the party leadership take action to "leave factionalism behind, slough off antiquated political concepts and let the next generation take control of party mechanisms.” Chao’s angry outburst was only one of many salvos fired in the internal war over the party chairmanship.

Former Vice President Annette Lu quickly weighed in on the chairmanship question, pointedly repeating her position that the party chairmanship and its 2016 presidential candidate should be treated as separate issues. If Tsai Ing-wen is interested in running for president two years from now, said Lu, she might be wise to sit out the election for party chairman.

With Tsai in a commanding position for the chairman’s race now, however, if Su were to decide that he wants to run as the party’s candidate for president in 2016, party members would need to take a long look back at what happened in 2012 when Tsai was party chairman and the DPP ticket was Tsai for president and Su for vice president.

Former DPP legislator Lin Cho-shui said Su and Hsieh’s announcement that they are not entering the chairman’s race is their own decision and he would not comment on that. He stressed, however, that party leaders, whether they intend to get involved in the race or not, owe it to party members to make a clear statement on their views on the need for reform in the party, to help others determine the direction in which such efforts should move.

Kaohsiung Mayor Chen Chu refrained from criticizing Su for his announcement. Chen noted that taking office and leaving office should be done with grace, and Su’s decision to step down from the chairmanship by declining to register for the race was indeed done with grace and dignity – as she put it, “it was pretty.”