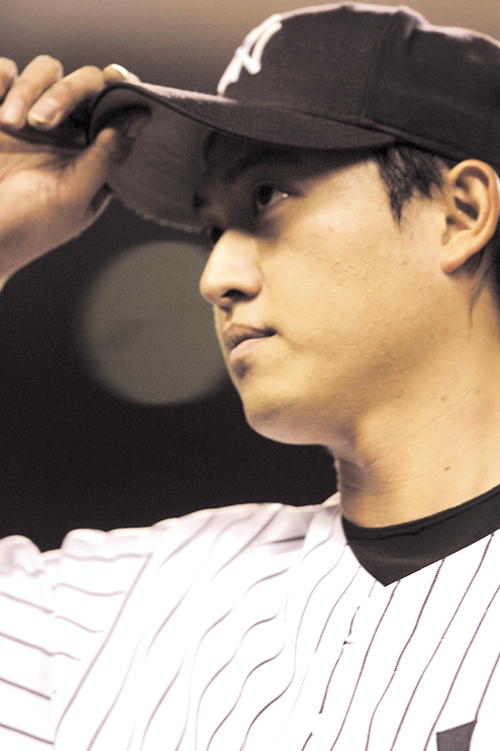 Quick, alert the World Wildlife Foundation, someone ate a tiger for breakfast! At least that was what some diehard Wang Chien-ming fans were saying when the "Pride of Taiwan" beat the Detroit Tigers yesterday.
Wearing the Yankees trademark pin stripped jerseys with Wang's number 40, hundreds Wang fans, ranging from a 85 year-old grandmother to a five year-old kindergartener, office workers to high school students, packed into the basement of a department store to watch their favorite pitcher attempt to lead the Yankees to another victory.
"I love Wang because of the ground balls he gets," said 6-year-old Chu Cheng-chih, who woke his mother up at six o'clock yesterday morning just to come to the game.
Chu's mother, also a devoted Wang fan, said her son has watched every one of Wang's games since the 26-year-old baseball phenomenon became a major league pitcher for the New York team.
The "Wang Craze" has apparently also made its way to the silver-haired crowd. A grandmother came to the game to root for the most adored ballplayer in the country.
"He is the pride of Taiwan so of course I support him. I don't understand much about baseball but when I hear the crowd cheers, I know that means he has done something awesome again," said 85-year-old Wong Ywe-ying, who came with her 55 year-old daughter.
Another hard-core Wang devotee, Liu Chang-chieh, dragged his sick five-year old to the watch the game.
"I took a day off to take care of her, but I thought instead of wasting a day at home, why not come watch the game," Liu said.
Even high school students, who should be preparing for their college entrance examinations, gave themselves the morning off to come watch Wang throw his famous sinkerballs.
Michael Chen, a 17-year-old student from Taipei Chenggong High School said it was worth sloughing school for a few hours just to watch Wang play.
"I have cut school a few times to watch Wang's games and I'll probably do it again for his other games," said Chen, adding he has never gotten caught and even if he did, he thinks his teachers would not get too upset at him because he was supporting Wang.
Although Taiwan was always a baseball country before Wang's escalation to fame, his record breaking winning streak has definitely stirred up a baseball mania across the island.
Many believe Wang's stellar performance has single-handedly brought Taiwan out of obscurity and transformed the county into an international focal point. Some even called Wang the "most effective diplomat" the island has ever seen.
When Fox News showed a map of Taiwan during the game's broadcast to introduce Wang's background, the roaring crowd screamed and applauded to see the country talked about in such positive light in the international media.
"I support Wang because he is one of the reasons why I am proud of being a Taiwanese," said Chen.
Even legislators who often resolve their differences by brawling on the debate floor, come together whenever it comes to showing support for Wang.
Democratic Progressive Party Lawmaker Huang Wei-cher, who represents Wang's hometown of Tainan, said he took the morning flight to Taipei yesterday in order to join other legislators in watching the game at the Legislative Yuan.
Kuomintang lawmaker Huang Chih-hsiung, an Olympic silver medalist at the 2004 Olympic Games in taekwondo, joined the bipartisan festivity in his jogging suit said he would not miss any chance to root for the "only non-controversial topic" in Taiwan.
However, some legislators said it is "pitiful" that Taiwan's current political situation is so awful that Wang's baseball skill is the only thing left that politicians can agree upon.
Though Wang's popularity has proven to be strong enough to entice some people to cut school and slough work for a few hours, some students said that even though they liked Wang, they could not justify ditching classes just for the game.
"Why go see his game when I will hear all about it later? Besides, watching Wang play won't guarantee me good grades," said a high school student.
He might be right on that one, but it still did not stop nine school principals in Kaohsiung County from suspending the first two periods of classes yesterday morning so the entire school, including teachers and staff, could watch the game.
"Wang is a great athlete not only because he is a skilled player, but because he has a humble attitude. He is definitely an example to all the politicians in Taiwan to do more and talk less," said another fan.