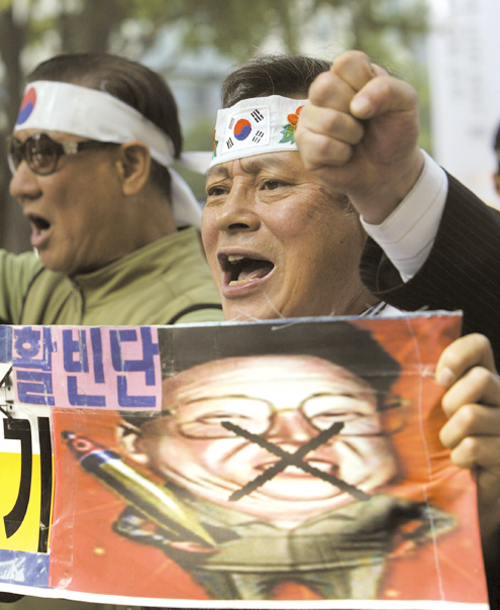 Neighboring countries yesterday cautioned North Korea against carrying out a planned nuclear test, while a top South Korean security official said there was no sign a test was imminent.
China, Japan and South Korea all announced separate one-on-one summits among their leaders next week, ratcheting up diplomacy over tensions caused by the North's announcement Tuesday that it intends to conduct the test.
Such a test would confirm the North's claim that it has atomic weapon capabilities, and would severely undermine efforts to prevent an Asian nuclear arms race by getting Pyongyang to disarm.
South Korea's top official on dealings with the North, Unification Minister Lee Jong-seok, said Wednesday that there were no definite signs that the test is imminent.
However, Lee also told lawmakers there was "a high possibility" it would eventually take place if "efforts to resume the six-party talks fail," Yonhap news agency reported.
North Korea has boycotted six-nation nuclear talks - which also involve China, Japan, Russia, South Korea and the U.S. - for nearly a year, angered by U.S. financial restrictions imposed over the North's alleged illegal activities such as money laundering and counterfeiting.
Meanwhile, an official at the North's embassy in Australia, Pak Myong-guk, who described himself as a minister, said yesterday that Pyongyang's planned nuclear test "is not provocative."
"It is just the corresponding measure for defense, for us to defend ourselves," Pak told The Associated Press. "It is the really essential process for nuclear deterrent."
The North often insists it needs nuclear weapons to deter a U.S. attack.
South Korea's President Roh Moo-hyun yesterday called for a "cool-headed and stern" response to the North's announcement, while Foreign Ministry spokesman Choo Kyu-ho said a nuclear test by North Korea could cause a change in its engagement policy toward the communist regime.
"If North Korea pushes ahead with a nuclear test, North Korea should take full responsibility for all consequences," Choo said after an emergency meeting of South Korean security ministers.
Asked to elaborate on what the consequences would be, Choo said a North Korean test could bring about a "shift" in Seoul's engagement policy toward the North, but also said that doesn't mean abandoning that policy altogether.